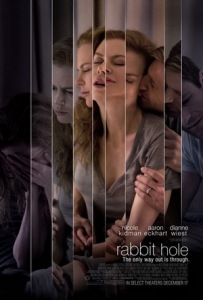 Rabbit Hole is a modest film — a film based off of David Lindsay-Abaire’s original play that he adapted for the screen. However, that is not to discount the big performances that fill up the screen from Nicole Kidman and Aaron Eckhart to Miles Teller.

The film finds its drama in the story of a seemingly perfectly successful couple Becca and Howie, except the pair is still trying to get over the death of their four-year-old son. It’s been 8 months now, but Becca still seems far from ready to move on with her life.

She doesn’t want another kid. She can’t bear to see the dog that Danny was chasing into the street. She does not want to go to a support group, and she remains mostly aloof with her mother and sister, who hardly run in her same circles.

The moment the story takes a turn begins when Kidman’s character takes a great deal of interest in a boy. This is not some strange obsession or desire for a tryst. It’s nothing like that at all, but we begin to wonder why is she so interested in this seemingly ordinary high school student on the bus.

It might be clear to some right off the bat, but for others, it will take a few moments…Yes, that’s right. He was the one driving the car! He was there when it happened. That’s horrible. That’s awful. How are you even supposed to deal with that? How can you handle meeting face to face? Except Becca does meet with him in the park, and it may not seem like therapy, but it is just what both of them needed. They want things to be made right again, but they can never quite go back to the way they were before. They want someone to talk to and so they do, about whatever they want, whether it’s comic books, prom, or something else.

However, the news of their meetings finally becomes too much for Howie. The roles get switched as she becomes the cool and collected one while he seems to be losing it himself. It even gets to the edge of a precipice that almost drops into the chasm of an affair. But he doesn’t fall in. He and Becca slowly begin to patch things together, and their life slowly begins to fall in place.

Rabbit Hole is engaging because it speaks of how to cope with death and the kind of loss that tears your life apart. It considers what it is to mourn well and how we still must move on with our lives in a healthy way. The hard part is that there is hardly an easy progression, and sometimes it feels very subjective as to what a “healthy” way to grieve even entails.

Honestly, I watched this film out of curiosity in Miles Teller’s performance, thanks to Whiplash and especially The Spectacular Now, but I ended up being treated to two turns by Nicole Kidman and Aaron Eckhart that really commanded my attention.