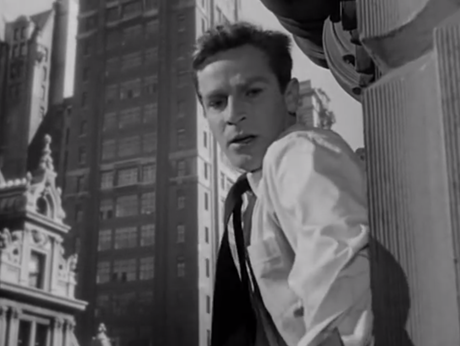 Fourteen Hours is a taut little thriller, based on real circumstances that occurred in New York in 1938. The film opens with a young man standing on the ledge of a tall hotel in New York City. An unsuspecting waiter happens upon him and a traffic cop (Paul Douglas) spies him from the street below. All of a sudden, a mundane day gets a little more exciting for all the wrong reasons.

Henry Hathaway’s film has the kind of self-contained drama of a modern film like Phone Booth (2002) and a media frenzy that is in some ways similar to Billy Wilder’s Ace in the Hole (1951). Really when you break it down it’s essentially about two men. Robert Cosick (Richard Baseheart) is the despondent and disturbed man tottering on the edge of destruction. He needs a friend. He needs guidance. The rapport built between him and Charlie Dunnigan (Douglas) is what keeps him where he is.

Outside of this main dynamic, we have a lot of smaller events all happening at once. The gruff deputy chief Moskar (Howard Da Silva) tries to work on the inside of the hotel to get the man indoors. A psychiatrist with a hypnotic stair (Martin Gabel) tries to divvy out advice to Dunnigan and others. Meanwhile, Robert’s histrionic mother (Agnes Moorehead) and his plain-speaking father both make appearances, but to no avail. They even finally track down his girl Virginia (Barbara Bel Geddes) in the hopes that she can get him down. All the while the journalists scrounge around for a good story that they can feed to their papers because this is news!

Down in the streets below young people (Debra Paget and Jefferey Hunter) look up wishing they could do something. The cynical cabbies decide to make a wager on when the man will jump since they aren’t getting any more business for the time being. Even Grace Kelly makes an appearance (her debut), as a young wife who is about to go through with her divorce. But the man on the ledge flusters her and she and her husband have a happy ending.

Hour after hour drags on as Dunnigan continues to work on Robert to get him to come in. He loses his temper once, converses about fishing for floppers, and talks fondly about his wife. By far Paul Douglas is the standout because he has such a genial quality that makes his newfound friend, and the audience, trust him. He’s a good egg as they say, and at the end of the day, he gets to walk off with his wife and son after a good day’s work.

I think it’s true that the film was remade as Man on the Ledge, but I doubt that I would ever want to see it after this film. Don’t get me wrong, it crawls a little bit in the middle, but the combination of this human drama and the plethora of characters lent itself to a generally interesting tale. Also, it’s never static visually. Hathaway gives us a lot to look at. I will admit that several of the storylines were flimsy and unnecessary, but it was still fun to see Grace Kelly for at least a few moments.