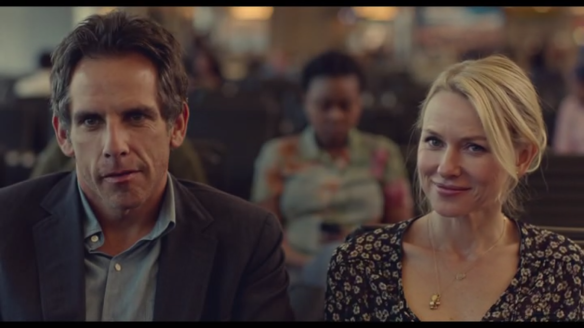 “It’s the Goonies and Citizen Kane. They don’t distinguish between high and low.” ~ Ben Stiller as Jamie

Although not nearly as prolific, in some respects Noah Baumbach feels like a lesser heir apparent to Woody Allen, if in fact the veteran filmmaker ever stops making films. Nevertheless, Baumbach seems to have a knack for a similar cross-section of New York. Frances Ha is his Annie Hall with the cinematography of an updated Manhattan. Also, his characters are more often than not middle-class intellectuals. People who think, have deep conversations, and yet there still manages to be something funny or different about what they have to say.

While We’re Young begins something like this. There’s a middle-aged couple stuck in neutral scared out of their minds about kids, and at the same time scared of growing older all alone with just the two of them. They have some good friends, who now have a child, and now Josh (Ben Stiller) and Cornelia (Naomi Watts) feel lonely. Then, they meet Darby (Amanda Seyfried) and Jamie (Adam Driver) and phase two begins.

Baumbach proves he really is a different creature entirely, and While We’re Young embodies that with its progression. It’s not quite what we expect. It’s refreshing, lithe, and friendly. Hold that thought. Maybe that’s actually exactly what we wanted and expected — at least for now.

Very quickly these two couples connect on so many levels despite their vast age difference. The old ones feel young and the young ones are really old souls guided by free spirits. They live life as they please without the drudgery that Josh and Cornelia feel weighed down by.

He’s been working on the same documentary for eight years now with the same talking head (Peter Yarrow), and he and Cornelia have hardly been out of the house, much less the country, in the last several years. To make matters worst he feels like he’s living in the shadow of his highly-successful father-in-law (Charles Grodin). In utter contrast, Jamie imbues so much passion it’s hard for Josh to not to latch onto that.

Their friendship blossoms in such a way that Josh and Cornelia almost seem unrecognizable with their hip-hop and fedoras. It’s not obvious quite yet whether that’s a good or a bad sign. But of course, the story doesn’t end that way. Because that’s not life, or at least not the way of real life outside of the world of filmmakers and documentarians.

Darby and Jamie aren’t the perfect young couple they seem to be. Their mish-mash of culture and public domain mentality has a downside. It gets worse than just the Goonies and Citizen Kane. After all, what are we supposed to expect? Two people who build their own furniture, make ice cream for a living, and live off old records and VHS cassettes have faults too.

Something happens that shakes Josh and the audience out of their reverie. In fact, everyone is brought back to earth. The world is often full of lies or worse yet half-truths. Unfortunately, we have to learn to accept them even when it feels so unjust. Joshie learns a valuable lesson about humanity and the younger generations. They aren’t evil and they are far from perfect.

In its finality, While We’re Young wasn’t the pretty picture that we half-expected. In fact, it got downright weird, dark, and deceptive, before giving way to apathy.  But that’s okay. Life doesn’t always end there. There’s often a hopeful epilogue and so it goes with Josh and Cornelia.