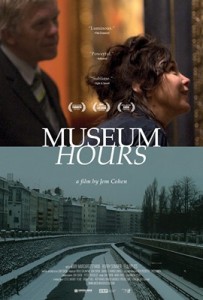 There are few films where art and film more obviously intersect than Museum Hours. In fact, its director and general mastermind Jem Cohen blends the line between filmmaker and multimedia artist. His generally deliberate piece on Kunsthistorisches Museum of Art follows two figures in the vibrantly beautiful city of Vienna, Austria

Johann (Bobby Sommer) is a museum guard with a reassuring face full of kindness and good humor. He spends his days in the museum, a place where he finds tremendous tranquility and great contentment in the vast intricacies of the beauty around him. For others, this would be wearisome work. From his perspective, it’s an immense joy. His eyes are constantly taking in the world around him, bright and full of awe. Always ready to help.

In one such occasion, his gaze happens upon Anne (Mary Margaret O’Hara), an obviously frazzled traveler, lost in a world that is foreign to her. In truth, she came to Austria after receiving news of the deteriorating health of a distant relative. Johann willingly gives her directions to the hospital and soon enough the museum becomes her little oasis too.

So if the film did have a plot that would be it. Two people finding a connection in a great big city. And yet this film is hardly Coppola’s Lost in Translation. The arrival of Anne in Austria is seemingly only a pretense for the audience to spectate. In some ways, it’s quite reminiscent of the contemplative nature of Christ Marker’s Sans Soleil, at times blended with the naturalistic visuals of Malick’s Tree of Life. It operates as part film, part documentary, with voice-over often playing over images. Everyday scenes mixed with works of art, and ultimately leading to a greater appreciation of both.

Often the camera is stationary and as such it watches the world of Austria rather like the patrons who wander through the halls of the museum surveying the most mundane things with a degree of awe, peering at the beauty that lies there within. We can use the same critical eye we use to look at art for life. Not to find fault but on the contrary, to develop a greater appreciation for all that is around us.

The likes of Cranach, Rembrandt, and especially Bruegel bring to light the beauty that can be found in our world, even in the smallest of instances. Different people take it different ways. A tour guide will become didactic, patrons in a tour group will try to come up with all the answers, and kids are content sitting in a corner to stare at their phones as the world passes them by. But Johann has the right idea. It really is rather a child-like perspective, in the sense that each day brings new excitement and he garners great joy out of the little things.

Obviously, I’m a bit biased as someone who likes paintings and art history, but Museum Hours is a powerful film that truly elicits a greater appreciation for art, but more importantly life itself. Really, there’s no need for a score, because that would almost detract from the pensive nature of Cohen’s work. It’s about the juxtaposition of visuals. That’s where it gets its power.