“He spat on Balzac!”

Jean Renoir always had a preoccupation with class divides and Boudu showcases that same blatant juxtaposition of class, or more precisely, the lifestyles of the middle class versus a lowly tramp. Except in this specific instance, the tramp (the indelible Michel Simon) could care less about the gap. He thumbs his nose at any charity and makes no effort to conform to the reins put on him by the reputable of middle-class society.

The man who steps to the fore is a middle-aged married bookkeeper who has the hots for his housekeeper. With his wandering spyglass, he spots the hapless Boudu jump into the Seine. From that point, he leaps into action toddling out to the street followed by the crowds of onlookers. He’s the first to plunge himself into the depths to bring the unfortunate soul to safety, and his middle-class brethren laud him for his supreme act of charity. But Monsieur Lestingois does not stop there, insisting that the wretched man be brought to his nearby flat.

Soon Boudu is wrapped up in middle-class luxury that he didn’t ask for, at the behest of Edouard who takes an initial liking to this bushy-haired man he happened upon. After all, he is intent on playing savior and Boudu obliges. It’s in these forthcoming scenes that Renoir examines class in a satirical way, feeling rather like a precursor to some of Bunuel’s later work, without the religious undertones. And yet for some reason, we cannot help but like Boudu a lot more. True, he is loud, messy, rude and unruly, but there’s something undeniably charming about his life philosophy. There are no pretenses or false fronts. He lets it all hang out there. In this regard, Michel Simon is the most extraordinary of actors, existing as a caricature with seemingly so little effort at all. He steals every scene whether he’s propped up between two door frames or cutting out a big swath of his beard for little reason.

In the meantime, he wears their clothes and eats their food, but he doesn’t have to concede to their rules. Boudu ends up winning the lottery of 100,000 francs, while unwittingly stealing away his esteemed benefactor’s unhappy wife. Whereas Boudu has the audacity to do the unthinkable out in plain view, he’s perhaps the most brutally honest character in the film. Everyone else veils their vices and hides their true intentions behind good manners and closed doors. But there has to be a point where all parties involved are outed and the moment comes when husband and wife simultaneously catch each other. 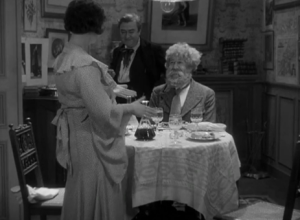 Charity in a sense is met with scorn, but it feels more nuanced than, say, Bunuel’s Viridianna (1961). In many ways, Boudu seems like a proud individual or at least an independent one. He hardly asks for the charity of the wealthy, and he’s content with his lot in life, even to the extent of death. It’s also not simply chaos for the sake of it, and he hardly lowers himself to the debauchery of Bunuel’s unruly bunch. Still, he obviously rubs the more civilized classes the wrong way, by scandalizing their way of life and trampling on their social mores without much thought. It’s perfectly summed up by the last straw when  a fuming Edouard incredulously exclaims, “He spat on Balzac.” The nerve!

The ultimate irony is that Boudu ends up in the water once again, and he’s not the only one this time. This also serves to take Renoir back into his element, because he’s always at his best in the great outdoors where the natural beauty of parks and rivers become his greatest ally in his misc en scene. Still, his framing of shots always gives way to a beautiful overall composition inside and out. Boudu is no different. You simply have to sit back and enjoy it like a pleasant outing on the Seine.