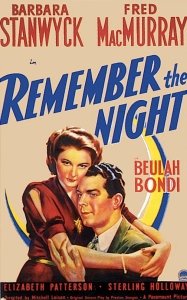 I find that many of the best Christmas movies aren’t really about Christmas at all — at least not in the conventional sense that we’re so used to. Not trees or presents or lights or even holiday sentiment although those might all be there.

The films that start to tease out the true meaning and impact of the Christmas season start by looking at people and their relationships with one another. Because, truth be told, we so often get distracted by the bright colors and shiny objects that get in our way.

That’s actually part of what Remember the Night is about. Lee Leander (Barbara Stanwyck) is a woman who has a penchant for stealing jewelry. She’s not a kleptomaniac or wrong in the head, she’s just a poor, unspectacular woman with nothing to show for in life. She lives in a hotel. And so the minute she’s apprehended and prosecuted in the courtroom you would assume that it’s nothing out of the ordinary.

Except this is a romantic film starring the likes of Fred MacMurray and Barbara Stanwyck working from a script from Preston Sturges and under the guidance of Mitchel Leisen. So obviously that tips us off that love is in the air. Especially during the Christmas season, love is all around us — peace on earth and goodwill towards men.

Except when Lee’s trial is postponed by the astute district attorney on the other side of the table, it looks like she’s in for an abysmal holiday. She has no money, no place to go, and she’ll be spending her time behind bars (with a Christmas dinner of course). But John Sargent goes through a change of heart and his heart is fairly big when you get to know him. He ends up getting Lee out of jail for Christmas dinner as recompense and goes a step further still by inviting to take her back to her family home. They both hail from rural Indiana.

In this leg of the film, on the road, they begin to warm to each other. A certain amount of empathy sets in as they must flee pell-mell from some small town law enforcement after unlawfully milking a cow on private property. However, John also stands by his new companion when she returns to her childhood home — a place she ran away from at an early age — she’s not welcomed back.

And while it doesn’t tell the story of Christmas overtly, it’s at this point that Remeber the Night begins to make sense. Hence the title. At least in my mind. Because what night would you remember? The logical progression of thought would be the first Christmas — the moment where the biblical narrative notes that there was no room for the child in the inn and so he was forced to be housed in a lowly manger on that silent night.

If you look at John’s mother and aunt played so lovingly and nurturing by Beulah Bondi and Elizabeth Patterson, you get the sense that they were probably aware of that event. However, how they act is also a natural outpouring of their hospitable natures. They welcome Lee into their home, they welcome her like family, they go so far out of their way to make her comfortable. Certainly, this is only a backdrop for the broader more sentimental focal point of the film which we were expecting. The accused and the prosecutor begin falling in love, but they still have to return to the courtroom when their holiday is over.

But that’s what wonderful films do. They work above and beyond their plotline being displayed at face value. Sturges was always a spectacular screenwriter even before becoming a director and here he develops a tale that comes off less frenetic than many of his later works, but it’s also imbued with a great amount of feeling. But credit also goes to Leisen for tailoring the script to his leads.

And as it’s set during the holidays, that makes it into a timely movie for the Christmas season (and New Years). Because the bottom line is that it’s about love, but not just in the romantic sense. Love of family. Love of your fellow man (and woman). Love of other people so much so that you are willing to sacrifice and take on the penalty for your actions, deserved or not. If we strip down the impact of Christmas to its core elements that’s essentially what it is about as well. So remember this movie during the holidays and remember that night if you’re so inclined.

Merry Christmas to all, and to all a good night!