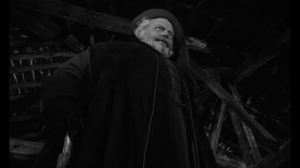 “There live not three good men unhanged in England. And one of them is fat and grows old.”

It seems Orson Welles never did anything on a cursory level. There’s always a gravitas — the unique personality of the man displayed in his work whether it is behind the camera or in front of it. But in the same breath, he never takes himself too seriously. And it’s no different in his orchestration and portrayal of the character Falstaff in Chimes at Midnight. It’s easy to argue that Charles Foster Kane was more memorable, Harry Lime was more beloved, and Hank Quinlan more remembered, but truly Shakespeare’s Falstaff just might be Orson Welles greatest role. At the very least his most underappreciated role for the very fact that far too few people have seen it.

He’s blustering and rotund, filling up the frame not only with his girth but with his witticisms and tall tales.But as much as this is a comic tale of farcical proportions, it’s also a storyline of tragedy and betrayal.

Being woefully under-read when it comes to Shakespeare, it was hard to come into this story because I had very meager reference points. However, Welles fuses together fragments of four narratives into an epic tale of his own creation, so prior knowledge perhaps was not admissible. The works he picked from include Henry IV Part 1 and 2, Richard II, Henry V, and The Merry Wives of Windsor.

Still, when I do get in such a state of disarray, I have learned not to fret and to simply sit back and partake of what is offered me. With Welles, this is not a difficult task at all because of what he gives the viewer. It’s always spectacular, grandiose and richly wrought in some way, shape, or form. And for Welles the impresario, the Bard is a source of inspiration that is truly worthy of him, or you could say it the other way around even. He is worthy of the Bard. 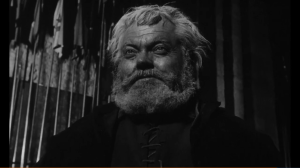 The triangle with Prince Hal (Keith Baxter) vying for the affection of his father King Henry IV (John Gielgud), while simultaneously holding onto his relationship with Falstaff is an integral element of what this film is digging around at. But there’s so much more there for eager eyes.

Once more, rather like The Trial, it’s easy to marvel at the restrictions that Welles faced and what he still accomplished within that forced economy. He took the Spanish countryside, a budget of less than $1 million and crafted a work that is often considered the best Shakespearian adaptation ever and some say even the best of Welles. If the man himself was any indication, then maybe so, because he was fond of this work in particular.

From an audience’s point of view, he does some truly spectacular things. Despite the poor sound quality really throughout the entire film, the interiors of the castle are expressive in the same way The Trial’s cavernous alcoves were. Equally telling are Welles’ trademark low angles.  But Chimes at Midnight also spends more time outdoors, the most spectacular scene being the battle sequence portraying the Battle of Shrewsbury.

Welles uses every imaginable trick in the book to make 18o extras and the Spanish countryside work for him to the nth degree. It develops one of the most dynamic, perturbingly chaotic war zones ever through cross-editing, trick shots, speed changes and an elaborate patchwork of images that turns war into something unfathomably ugly. His smoke and mirror techniques matched with the chaotic clashing of metal, weaponry, bodies and jarring visuals is a superb showcase of a truly inspired filmmaker. Because the images are so evocative, adding to something far greater than their individual parts. 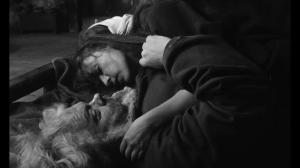 And it’s only one high point. Aside from Welles towering performance, Jeanne Moreau stands out in her integral role as Doll Tearsheet, the aged knight’s bipolar lover who clings to him faithfully. The cast is rounded out by other notable individuals like John Gielgud, Margaret Rutherford, and Fernando Rey.

Honestly, few others can hold a candle to Falstaff. A great deal of that lies in the similarities between the character and the man playing him. He’s portly,  speaks in rich tones with tremendous wit but the bottom line is that he is met with tremendous disappointment, despite the towering heights of his reputation. He’s constantly short on funds trying to get what he needs from the relationships he’s cultivated with the people around him. However,  in the end, he wasn’t so lucky and the same could be said of Welles. Although Falstaff was exiled from the King’s presence, whereas Welles put himself through a self-made exile of his own. Still, he managed to come out with a work as stunning as Chimes at Midnight. That in itself is a tail worth noting about a man who was larger than life in his own respect. This is a miracle of a film not because it is perfect. It’s far from it, but it has so many remarkable moments in spite of its circumstances. It deserves to be seen by more people.