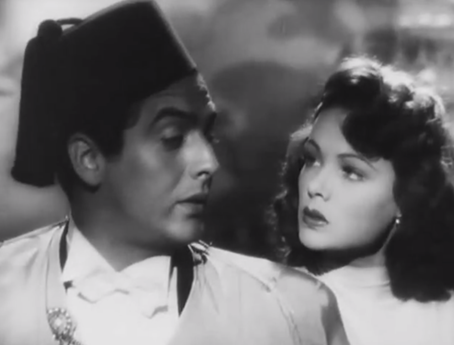 Josef Von Sternberg always seemed preoccupied with telling stories involving places that he indubitably knew little about but therein lies the allure. He could develop the Moroccos, the Shanghais, the Macaos into places imbued with far more meaning than they probably ever could have in real life.

Because he is hardly working in reality but with the inventions of his own mind and he was a master when it came to setting the scene and texturing atmospherics. He was a world maker and one of the finest craftsmen in Hollywood exoticism.

The opening prologue juxtaposes the seedy underworld that we are about to witness to the last remnants of the Tower of Babel where Man coalesced in his indiscretions before being scattered over the ends of the earth. It proves to be a rather odd analogy as the film revolves around a velodrome of gambling — a pit of worldly devices that the camera slowly descends on.

Visually it’s the inverse of babel as our eye is led to sink into this world of Mother Gin Sling’s establishment, joining the ranks of Rick’s Cafe, the Cantina, and countless others in the pantheon of dubious melting pots of humanity captured on the screen.

We meet a fair many of the individuals who play a small part in her operation including Dr. Omar (Victor Mature) and Poppy Smith (Gene Tierney), a young provocative beauty looking for a good time and a glimpse of the notorious proprietor.  Then our friendly neighborhood dragon lady (Ona Munson) makes an appearance and things are in full swing.

The kind Doctor easily distracted by an attractive young woman, lets himself get wrapped up with Poppy while still sharing drinks with Ms. Dixie Pomeroy. But this is only a minor spat.

The main problem is Mother Gin Sling’s who has been ordered to relinquish her property and move her establishment to the Chinese sector which is far less profitable. But being the conniving magnate that she is, she’s not about to go down without a fight before the New Year.

She will host a little dinner party inviting many prominent guests including Sir Guy Charteris (Walter Huston). All of this feels fairly straightforward and mundane though there is an obvious sense that dark secrets are being veiled in shadows to be revealed at the most advantageous moment.

Though it never truly grips us with a substantial climax, the film’s laurels rest mostly on its setting and the breadth of its character reservoir. It always makes me sad to see Marcel Dalio relegated to a roulette man following the work he commanded in the films of Jean Renoir. Meanwhile, Eric Blore always delights me even in his smallest, most insignificant appearances. In this picture, he plays the Bookkeeper. There’s not much to be said about his cruciality to the plot but he’s delightful all the same.

The feisty Phyllis Brooks delivers an acerbic and spirited performance as the chorus girl that comes with a lot of panache even if it feels so at odds with the world she has fallen into. Perhaps that’s the point.

But rather remarkably her screen presence is only surpassed by Gene Tierney in a seemingly uncharacteristic role — though I admit that the assertion is made with a certain degree of foresight glancing over the extent of her career.

In Laura (1944),  Tierney played a character who was a femme fatale without ever trying to be — men simply got drawn under her spell but in Shanghai Gesture, there’s a markedly different glint in her eye. It’s probably the same glint that would make her so deliciously evil in Leave Her to Heaven (1945). But no matter, she’s a conceited and ungrateful woman with a compulsive nature for the roulette wheel. Thus, her main companion is not Dr. Omar but gambler’s fallacy.

While there are some enjoyable performances, the aforementioned providing perfect specimens, the holes or inadequacies of the cast in certain areas is also an obvious weak point. Yellowface and other types of whitewashing are not just a matter of bad taste they simply take the world of the film and make it feel a little bit hokey when you think of the alternatives.

It really is a shame that at the very least Anna May Wong couldn’t have donned the role of Mother Gin Sling, especially because she appeared prominently in Shanghai Express (1932). Some might consider this as a spiritual sequel to von Sternberg’s earlier film barring the absence of two of its finest assets, namely Marlene Dietrich and Wong.

True, once again even if she was cast, there could be another digression on perpetuating negative stereotypes but if you don’t even have a part, to begin with, that’s a whole different problem. No disrespect to Ona Munson whatsoever but she seems woefully miscast. Anna May Wong would have at least been a step in the right direction.

There’s also the issue of the Hays Code which called for a markedly different script and numerous rewrites. Much of the content changes were for its earthier more debauched aspects, but another crucial change was Dr. Omar replacing a character named Prince Oshima.

Instead of the plastic piece of eye candy Victor Mature, we could have had someone maybe a little more authentic like a Keye Luke, Philip Ahn, or Richard Loo. And I’m not being very discriminating about acting styles just the fact that these men are actually Asian (not even Japanese) and they had some prominence in Hollywood. Just not enough to wind up in a film such as this — set in Asia — though completely enveloped in Hollywood’s own distillation of reality. Not even von Sternberg could save the film in that capacity with his production values. Still, fezzes are cool. It’s an undisputed fact. But if I had to make a personal preference I would take Greenstreet in Casablanca (1942) to Victor Mature here.