We meet the belligerent two-bit criminal named Nick Robey (John Garfield) sleeping one off in the grungy apartment he shares with his acerbic mother (Gladys George). It’s not exactly the lap of luxury but it gives us some immediate insight into who he is. He’s an oafish, pitiful excuse for a human being and he’ll never amount to anything. One very visible reason comes from his open disdain for other people; he and his mother share no amount of affection whatsoever. It’s not a very promising portent.

Norman Lloyd, once again, plays some sidewalk sleaze, like he did in Scene of The Crime (1949), this time coaxing his pal Nick into helping him pull a job. It looks as easy as pie. And it is. The man parks, starts walking away with his briefcase full of dough, and they overtake him easily — without a hitch of any kind. But it’s inevitable; in order for there to be any movie at all, something must go wrong. A nosy policeman starts poking around and they scramble to get away before he nabs them.

The cop fatally wounds Lloyd but Garfield gets away, not before gunning down his pursuer. Just like that he winds up a cop killer. Except no one knows his identity definitively. So he’s got to go on the lamb keeping himself masked with the weekend crowds.

It’s a fascinating documentation of weekend diversions, in particular, community swimming pools. With his payload of money in toe, Nick nervously tiptoes around the pool eyeing the oblivious policemen milling about. There he also meets a girl. She’s not only a cover but a bit of a welcomed distraction from his continual paranoia. 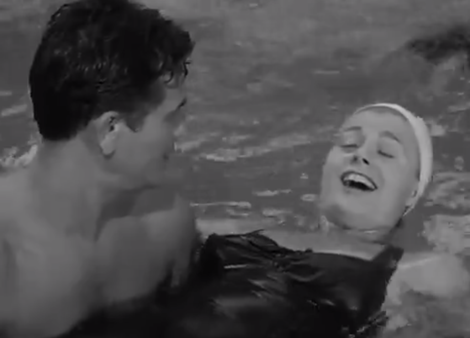 He Ran All The Way takes on a motif reused in Suddenly (1954) and other such pictures as Nick essentially becomes a live-in guest to Peg Dobbs (Shelley Winters), her parents (Wallace Ford and Selena Royle), and her kid brother (Bobby Hyatt). He lets them go about life partially unimpeded, keeping one of the family at home at all times as constant leverage. That way there’s no funny business.

While the picture is hardly Garfield’s best, it is imbued with tightly coiled tension that’s instigated in the opening minutes. The ticking clocks never end aided by confined spaces, oddly intimate relationships between captors and hostages, as well as a volatile showing by Garfield. He’s all turned upside down trying to deliberate on his future plans.

Then they have a clash of principles over the dining room table. The family with their stew and him with the turkey and the lavish meal he’s gotten together. They want no part of it but he’s going to get them to eat even if he has to provoke them at gunpoint. In another scene, he inquires gruffly, “What does that church stuff do for you?” Without skipping a beat, still working away on his model vessel, Mr. Dobbs succinctly replies, “it makes you understand the virtue of love.”

Thus, this dialogue aptly frames the story as a tale pitting family versus romance in such a way that only one can come out intact. Peg is the one forced to make a choice. James Wong Howe’s camera works in numerous close-ups and that continues even until the end of the film to underscore moments of isolated impact. Garfield’s face, in particular, is singled out. We see the fear, the anger, and the confusion breaking out across his features time and time again.

A stairwell finale perfectly epitomizes the dynamic between the two leads, see-sawing back and forth perilously. Until they make it to the ground level and things must come to their harrowing conclusion once and for all. 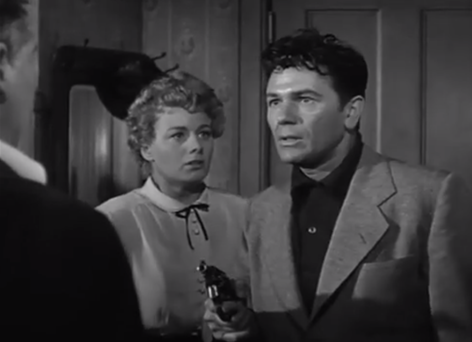 For all the hell Garfield put his captors through, the look on his face is striking, when it all comes to an end. It’s betrayal and fright and forlornness all rolled into one. Even as he’s a hard-bitten, tormented man, there’s still a sliver of something inside of him that we cannot help feeling sorry for. That’s a testament to the earnestness of his talent.

The context of the picture becomes arguably just as important as the film’s condensed narrative. Like any movie, it was hardly conceived in a vacuum and the early 1950s were, of course, characterized by the paranoid finger-pointing culture of McCarthyism.

The emblematic figurehead that always gets brought up is The Hollywood Ten — who subsequently were some of John Garfield’s closest collaborators. Dalton Trumbo even worked under a pseudonym on this script while director John Berry, for all intent and purposes, might have been christened the 11th member of this targeted group. Following the production, he would enter a self-exile in Europe.

But this would also be John Garfield’s last film and it would primarily be his last film — most people agree — because his heart attack, brought on at the age of 39, was caused by undue stress from the allegations he was embroiled in.

Even though he went before the House Committee on UnAmerican Activities, his appearance did not completely absolve him and on top of that, a separation with his wife looked to be ending in divorce. He would die on May 21st, 1952, his funeral attended by masses of mourning friends and fans.

He was the apparent forerunner to such other tragic figures like James Dean and Montgomery Clift and the not-so-tragic decline of Marlon Brando. Without Garfield, those fellows would have come out of nowhere but from him, you trace the line of progression from hardboiled stars like Cagney and Bogart. Watch these films and you recognize that same pent-up alienation and angst. Most importantly there’s a newfound sense of vulnerability being awakened.