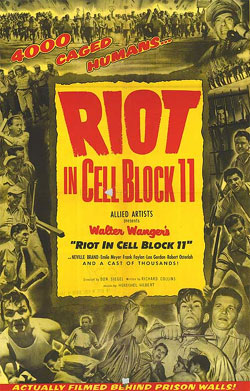 If you’re like me you met Don Siegel because of Dirty Harry (1971) or maybe The Invasion of the Body Snatchers (1956). But it was only after discovering the rest of his work — the likes of The Big Steal (1949), The Lineup (1958), or even this film, where you began to appreciate the consummate craftsman that he was.

The film makes a creative choice to set up its narrative with real-life newsreel footage of prison riots across America and this is no facsimile; it feels like the real deal. This decision begins with the initial impetus of producer Walter Wang to make a picture authentic to the plight of prisoners. Showing the inside and the inherent issues with such mass incarceration. Why would he have such a stake in telling these stories in a picture like Riot in Cell Block 11 or I Want to Live (1958)?

It’s because he actually spent a spell in prison himself after shooting his wife’s lover. That is a whole different story, but it gives us some context for the aims of this project.

Compared to Brute Force (1947) or Caged (1950), for instance, this is not simply a story of brutality at the hands of some maniacal prison guard like Hume Cronyn or Hope Emerson. Those narratives are assuredly entertaining. But for something that looks similarly exploitative, this picture decides on a more nuanced approach in a generally successful attempt at open-ended social commentary.

The warden (Emile Meyer), for instance, is a no-nonsense man but far from a tyrannical monster; he has a grim view of the prison system, knowing they are not always able to offer the best rehabilitation. He constantly strives for discipline while also harboring a certain level of sympathy for those deserving of it. He is a first-hand witness to the short-sighted effects of negligence in our justice system.

It turns out that before the days of Johnny Cash, Folsom State Prison was used as the shooting location for this film. Siegel even had the ingenuity to cast real-life prisoners as extras. I’m not sure how the logistics worked out, but the film undoubtedly benefits surrounding the already believable tough guys like Neville Brand and hulking Leo Gordon with a host of others.

The usual suspects include a skulking Alvy Moore (pre-Green Acres) and “The Colonel” who is the most learned of the inmates and helps to give them some credibility. The lives of prison guards, including Whit Bissell and Paul Frees, reflect how close the jailers get to their charges. That’s a dangerous arena and especially with the guy’s in solitary.

Without this overcrowded, undermanned system, there would be no Riot in Cell Block 11. As it is, four guards are easily overpowered and held hostage to be used as leverage against the authorities.  There’s a giddy jubilance to their trashing of the cell block that’s nearly comical, even as the stakes are far more harrowing. It proves far more than a game, with lives on either side of the wire at stake.

James V. Dunn (Brand) takes the lead, daring all others to join him and his band of cronies. Crazy Mike Carnie (Gordon) is the one who frightens everyone into line. But it is The Colonel (Robert Osterloh) who is called upon to organize their grievances to be presented. He provides a voice of reason and rationality we would be lacking otherwise.

The warden is put in an agonizing position, walking the tightrope between the prisoner demands and the outsiders coming in, including the pitiless commissioner Haskell (Frank Faylen), going all the way up to the governor. Likewise, worried spouses call his office about their husbands’ well-being as journalists (including William Schallert) look to stir up the story around the riot.

At its cores is this ideological war of treating prisoners firmly but with inherent dignity and then caging them up with the most merciless of standards to keep them in line. To show clemenscy is seen as a sign of weakness.

Inside and outside the bars, you see people with grievances and problems like any person. It humanizes everyone, in a sense, going beyond mere exploitative drama. It somehow wears a fairly convincing cloak of authenticity while still remaining pulse-pounding stuff. Because I’ve seen prison riots captured on film before but to my knowledge, there’s never been anything so enveloping and tumultuous on all fronts.

Keeping with Wang’s agenda, the film does not pull any punches as it slinks back into the status quo. There is tragedy, there is victory, and finally, there is a feeling of powerlessness in the face of bureaucracy. It’s as if a man’s word stands for nothing. It’s as if this whole ordeal was entirely pointless.  The finale is as eye-opening as it is pessimistic. But movies have a license to do that. It makes them a lot more lifelike.

4 thoughts on “Riot in Cell Block 11 (1954): Social Commentary in The Guise of Exploitation”