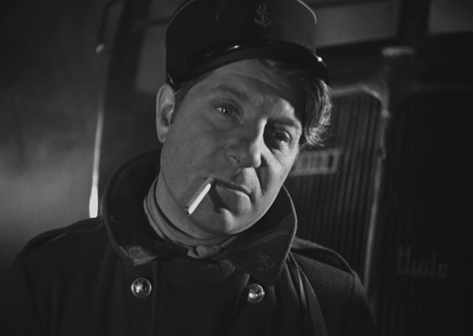 Jean Gabin has one of the great visages of the cinema. But in making such a statement you immediately run the risk of giving the wrong impression. To actually see him on the big screen is to know what I mean. He is not classically handsome in the Hollywood sense, fitting somewhere in between Spencer Tracy, Bogart, and Fonda when Hank had a chip on his shoulder. And yet set off in black and white as Gabin always was during his most prolific periods, there is something unmistakable about his face.

It is worn with the grooves, contours, and the residual sadness that come with life. He gives the impression of seeing the world, having his heart ripped out, being battered and bruised, while still choosing to press on anyway. You could say he has the entire French experience of the early 20th century on his brow. He’s simultaneously a projection of their best self in the face of hardship.

Historically, the cultural mood and the looming world war to come were ill-omens, as far as the release of the film was concerned. It was far too portentous to be met without some amount of resistance

In Port of Shadows, Gabin fittingly plays a jaded soldier who catches a lift to the nearby port town of Le Havre. In an opening act of clemency, he keeps his truck-driving benefactor from quashing a mutt masked by the billows of fog. It’s an instant flag. We know this man. His emotions are not obvious, but they are there; he concerns himself with the well-being of others. There is a heart under there somewhere. Scene after scene his constant companion is the runty little dog, a continual reminder of who he is as a man.

Along with setting up its star, we soon learn director Marcel Carne cares about his characters and takes care of them. Not that the environments are unimportant. Between the pitch darkness of the highway or the smoky and garish interiors of the club, there’s atmosphere aplenty. But Carne is focused on his players; their faces and distinct movements, allowing them to be focal points of scenes in a generally clean, uninterrupted fashion.

Between the instantly palpable world and the menagerie of players cycling in and out, Port of Shadows cannot help but feel like a prototype for everything from Casablanca to the entire film noir movement with its smoky brand of realism.

I don’t know much about the time frame of when the picture takes place. In all honesty, I’m not all that concerned with that so much because instantly you are pulled into a world’s depth of field with its shadow and fascinating figures. There’s a compulsion to fall into the story and be as fully involved as possible.

He’s in town, flat broke, and there’s an unspoken understanding he’s not looking to get noticed by the local gendarmerie — most obviously a deserter. This is one of those picturesque places where you can fall in with drunken vagabonds and find yourself on the receiving end of neighborliness.

As is, everyone who is down-and-out or in trouble seems to go to Panama’s, though it serves as little more than an old shack with a couple of rooms.  A sorry excuse for a hangout and yet it has far more life than the fancy club in town. It’s the people there who truly make it worthwhile.

Jean (Gabin) is given a meal by the ragged proprietor, gets some fancy talk from an amiable artist, before meeting the most important person: Nelly (Michele Morgan). She’s young but precocious, mature beyond her years. The same might be said of Morgan who assuredly holds her own against all her male costars. She’s thoroughly outnumbered yet she handles it poise.

It’s a testament to the strength and varied colorfulness of the characters that the illustrious Michel Simon almost becomes of less interest as Nelly’s despicable godfather, especially compared to the peculiar sots he was tasked with portraying in Boudu and L’Atalante. His big scenes come near the end of the picture anyway.

Mostly this is a love story. In a rare moment of self-reflexity, Jean mentions how theirs is a movie romance. It’s this heightened sense of romantic reality. If we put it up against anything we experientially know to be true, it’s poppycock, but between the eyes and embraces of Morgan and Gabin, it just feels right.

We also learn more about Jean. Not only is he capable of deep measures of love, but he has no tolerance for lowlifes and scum — those lacking a sense of honor or principle. You have it out with a man face-to-face with fists, not from behind. One of his main targets is the local gangster Lucien who is nothing more than an arrogant rich kid with too much time on his hands. He wants his hands on Nelly. Jean is having none of it. He cuts directly through the artifice, slapping him around for his impudence.

The story comes to a head on the docks and again, of all places, at the bumper cars in the middle of a carnival. You do not mess around with Jean Gabin when a girl is involved. This could be the movie’s ending; the romance would be the euphoric and the hero would remain triumphant. However, it is a movie and so a greater, darker, more wistful avenue of drama is in order.

Because Jean knows he is not safe, though he has gratefully taken another man’s identity. It is better for him to leave on the latest vessel shipping out to Venezuela the following day. His love for Nelly is great, but there is a need to move on, to let her be while also keeping her away from the trouble that would come from knowing him. He does the selfish or heroic thing (depending on how you look at it), in cinematic terms, and he doesn’t tell her. He holds off as long as possible.

One fine sequence is at the waterfront bar with kegs of alcohol lodged right outside the door. There’s a conversation at the bar between the bartender and an old acquaintance we’ve already met. At a distant table, our protagonist, with his new identity bequeathed him by the philosophizing painter, charts his course for Venezuela aboard the freighter now sitting in the harbor.

These seem like mundane enough scenarios, but instead of a normal cut, Carne rides an extra with his camera, acting like the seamless segue between the two conversations. It’s a classy and efficient way to keep the scenarios fluid even in a seemingly sedentary state.

These lulls lead up to what can only be seen as the film’s inevitable tragedy. Like the most sublime expressions of cinema, Port of Shadows is a visceral, emotive experience capable of so many things. It’s a piece of art: humorous, tragic, brooding, and searingly romantic. In short, a sheer pleasure to take part in.