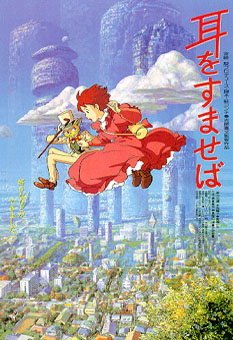 Whisper of The Heart is wholeheartedly a Japanese anime and yet learning John Denver’s “Country Roads” holds a relatively substantial place in the plotline might catch some off guard. After all, as the metropolitan imagery establishes our setting, we hear a version of the song playing against the bevy of passersby, cars, and convenience stores.

Director Yoshifumi Kondō boasts animation both simple and clean yet ever so attractive for those very same reasons. It positively glows with nostalgic yellow hues and employs anime’s preoccupations with the most intricate details — moths drawn to a light being just one prime example.

When I lived in Japan, I became fascinated by foreign music and how it gained a foothold in the country. You only have to look to jazz, The Ventures, The Carpenters, or Mariah Carey to see how deep their imprint is on the collective culture. The same goes for John Denver who made tours of Japan on several occasions.

But whereas musicians often become icons, sometimes Japan cultivates an environment where nuggets of culture can take on a life of their own. This theme serves as a perfect breeding ground for Ghibli’s classic coming of age story.

Shizuku is, at her heart, a spunky and feisty heroine with the kinds of hope and aspirations that often seem buried in a very restrained culture like Japan. In her middle school existence, an unknown person named Amasawa becomes an almost mythic figure in her life as they have checked out all the books she’s so voraciously eaten up in her nascent but ambitious literary odyssey.

They look to be a kindred spirit. It takes a fortuitous meeting with a commuting cat on the JR line to sustain her adventure. The disaffected animal leads her to a Secret Garden of sorts. This one is not found in nature but in the home of a delightful old man.

Because Whisper of The Heart is full of the blushing love of adolescence in its many tangles found throughout the student body. It’s no different in Japan, at least on the emotional level, or for that matter, the utter denseness of the male sex.

But it’s also a very particular world where dwarves and fairies can coexist with the mundane elements of everyday life. Shizuku comes to realize this when she reaches the end of her adventure — the peculiar second-hand shop cluttered with clocks, violins, and shiny doodads of all shapes and sizes. It’s run by a genteel proprietor who also happens to relate to her not so fictitious phantom: Amasawa.

This looks to be the working of Hayao Miyazaki behind the scenes because no matter how mundane we might perceive the world to be, he’s always allowing for bits of magic to seep in and liven up our existences. Implicitly, he always seems to be suggesting we need the richness of our imagination girded around us to make the most out of life.

He also employs the most amicable cultural appropriation, turning Denver’s down-home “Country Roads” into a lively, bright-eyed violin jam session in a Tokyo back parlor. It’s the strangest incarnation of the song I could have ever imagined and yet somehow it manages to be apropos. I only need to remember pop instrumentals of “Daydream Believer” during my former days frequenting 7-Eleven’s in Tokyo. It fits the aesthetic.

But back to Shizuku. Her newfound companion dreams of being a Violin maker and going off to apprentice in Italy. Not to be outdone, she wants to write stories. She’s charged with empowerment and then the subsequent doubts ambushing anyone who’s ever endeavored for such a thing. I am reminded of the artistic encouragement churned up by C.S. Lewis and J.R.R. Tolkien that blessed the world over with two of the most formidable fantasy worlds: Middle Earth and Narnia.

Because we need people who will gladly court our ideas, gives us encouragement, and supply even the brief inkling that our passing daydreams are not complete balderdash. If they provide enjoyment or engage with beauty or goodness for just one person, perhaps even this makes them entirely worthwhile.

The sagely old man charges Shizuku that craftsmanship of any kind is never perfect. But we must begin. We need to start somewhere. To pilfer the film’s own metaphor, we are all unburnished stones waiting to be polished to the point of perfection. There’s the necessity of time and effort to make it work. The diamond must be pulverized. The brass burnished. The grain sent through the thresher.

Again, Miyazaki’s imprint is all over the picture because he is always and forever the spinner of benevolent fairy tales paired with creative inspiration. His avid imagination never ceases to mesmerize. Surely there are lots of magical beings, soaring through the air, lands full of castles and kings, and yet the seat of it all is found in the revelation these very things can exist in our everyday reality. They need not be distant. Far off lands can come to meet us, be it through books or writing, music, or people with memories that extend far beyond what we see and know.

It’s easy for me to laud Whisper of The Heart for being timeless. Yes, we see word processors, a dearth of cell phones, more antiquated train services, and yet so much of the interactions, the yearnings, and the derivations are universal.

I must turn my attention only to the sound of cicadas, the warning bell near the train tracks, or the clink of a mailbox at the front door. They are so basic, so unextraordinary, and yet they sound so familiar. To my ears, they remain almost comforting. Because this movie is comfort food, whether you fancy udon or steak and potatoes.

Full of warmth. Love. Longing. Passion. Miyazaki and Ghibli have captivated the world over with such sensations. Yoshifumi Kondō more than proved himself capable of eliciting this same type of wonder. It’s only a shame he was not able to give us more films. But there only needs to be one solitary act of creation to leave an impression. Whisper of The Heart is an unassuming monument to his career.