It’s a Sunday morning in St. James Episcopal Church. The minister pulls his sermon from Proverbs 25:28: “A man without self-control is like a city broken into and left without walls.” But there is an elephant in the room, an unspoken force coming between the shepherd and his sheep. He starts to stutter before he erupts in an indignant tirade lambasting his parishioners.

There’s something unsettling in seeing Richard Burton as a minister. I would have felt a similar unease with Peter Finch as a preacher (he was a surgeon in A Nun’s Story). Although it’s true, the similarly resonant actor, Richard Todd portrayed one of the most sincere clergymen ever in A Man Called Peter.

But Burton has the largest and most volatile personalities of all three.  So when he loses his train of thought during his Sunday sermon, perched from his pulpit, it’s not altogether unwarranted watching him implode on the spot. We expect as much.

It feels like Reverend Lawrence T. Shannon (Richard Burton) has inherited the lectern from Barabara Stanwyck in Miracle Women, though his conflict is more difficult to sort out. It’s as much about the watch-dog hypocrisy in his own church as it is his personal crises of conscience. We don’t know what his presumed sins are, but as the pews clear and he thunders down the aisles, he calls out the fleeing congregants, denouncing them thusly:

“You’ve turned your backs on the God of love and compassion and invented for yourselves this cruel, senile, delinquent who blames the world and all that he created for his own faults! Close your windows. Close your doors! Close your hearts – against the truth of our God! ”

Be that as it may and totally regardless of his innocence or guilt, the next moment we see Shannon, he’s fallen to a new low — taking a busload of Texas schoolteachers down through Mexico so he can serve as their tour guide past all the religious relics below the border. 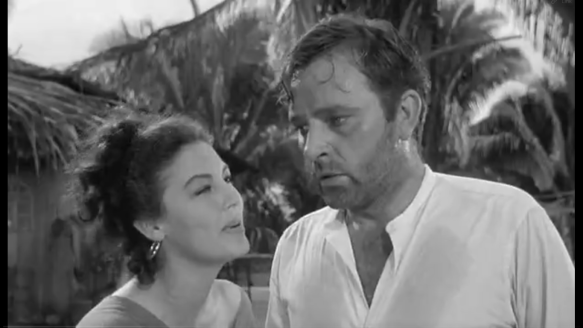 What a sorry figure he is — a tortured, broken, smarmy man just trying to get by. This portrayal is generally enhanced by the realization that Richard Burton, though he probably grew up in The Church of England, was at the very least a cultural atheist. Nor does he come off as a ministerial type. He was notorious for drinking like a fish. Meanwhile, his highly publicized off-screen tryst with Elizabeth Taylor was commanding the contemporary tabloid covers. It all fits into this conflicted, mercurial performance of his. Hardly likable but strangely compelling for all its wild instabilities.

James Garner is said to have turned down the role because “it was just too Tennessee Williams” for his taste. He’s not wrong and frankly as much as I love him to death, the part wouldn’t have fit. Burton can carry it off because his demons, whether real or imagined, are far more visible onscreen.

However, there is another pressing question. How in the world do you get the creative marriage of John Huston and Tennessee Williams? I’m not sure if you could call it a perfect match, but it’s ceaselessly interesting. It’s a new side of Mexico — in the fishing village of Puerto Vallarta — well after The Treasure of The Sierra Madre. Consequently, the setting seems a bit left-of-center for typical Williams fare even as the sordid dramatic content is much what we would expect. In the middle somewhere the two men meet.

The words from Proverbs are easily recalled as the disgraced Reverend finds himself being pursued by a loquacious young blonde (Sue Lyon continuing in her Lolita vein). She finds him easy to talk to and fascinating — his life is engaged with people’s souls and yet he’s young and virile. Charlotte takes a dip with him innocently enough and still notes she could never do this with the preacher back home in Texas.

It’s the first sign of hot coals. He wants nothing of her coquettish advances even as the acerbic chaperone Ms. Fellowes (Grayson Hall) watches him like a hawk — ruling over the girl with an iron fist of ascetic repression. It makes her a tiresome thorn in Shannon’s side; he’s about ready to go mad. Eventually, he does.

Having just about enough of their campfire songs and rigid drudgery, he shanghais the busload of priggish Baptist schoolteachers, taking them on a harrowing ride, bumping their way down the dusty backroads. He screeches to a halt, jumps out, rips out the distributor head, and proceeds to streak up the hillside with his suitcase. They might as well be in the middle of nowhere.

For the sake of this movie, they are not. The tropical Costa Verde hotel is hidden up in the forest overlooking the water, and it just happens to be run by an old friend of Shannon’s. Fred is dead, but his wife, the larger-than-life Maxine Faulk (Ava Gardner), is still running the place. She’s an earthy force to be reckoned with indebted to Gardner’s lively showing.

If not for her, Burton would probably steal the show, but he’s met with another gale storm of enduring cheerfulness and utter obstinance. Their impact is such you almost forget about Deborah Kerr. Sure enough, she appears on their doorstep as the peripatetic painter, Hannah Jelkes, who travels with her grandfather, a diminutive, 98-year-old poet.

Though the other two dominate the screen, she quietly commands it. When Gardner and Burton get to shoving the drink cart at one another, it is Kerr who becomes their unofficial mediator. Because she is a voice of reason, an artist with a pensive gaze, and a surprisingly lucid perspective despite her meager lifestyle.

Later Charlotte bursts into Shannon’s room yet again causing him unwanted torment as she tries to get him to go away with her. She’s very good at stirring up men’s hearts and instigating mini scandals in the process. In another scene, a fistfight for her affections breaks out between the tour’s bus driver (Skip Ward), and some local boys replete with music, maracas, and stereotypical flourishes. Huston plays it for a laugh. It’s inconsequential if not altogether inane.

Because it is from the stage, The Night of The Iguana does seem to stall. Eventually, the bus leaves without Shannon and the second half of the story feels like an existential dialogue more than anything else. It could be a dead-end, though on the merit of our three established stars, it remains something intermittently though-provoking if not entirely compelling.

The curious thing is how the adversary melts away. True, the bus leaves with both his temptation and condemnation and yet he has pity even on his adversary. “Miss Fellowes is a highly moral person. If she ever recognized the truth about herself it would destroy her.” He recognizes her as another conflicted, constricted creature — a fellow Iguana tied up to a post.

With the bottom dropped out of his life, Shannon wants to swim to China, seemingly a handy euphemism for ending it all. He’s taken to the brink of his wits, lashing out at Maxine and anyone else who will avail him. It’s Kerr who rules the final act amid the paucity of moral rectitude. She perceives that his version of Golgotha is on a green hillside overlooking the water. His cross being strung up in a hammock on the verandah. In comparison, it seems like a fairly cushy alternative. She strips him down to who he really is.

Far from condemning him, Jelkes feels strangely sincere and genuine, particularly for Williams. She perceives that his problem revolves around “The need to believe in something or in someone — almost anyone — almost anything.” It’s Augstine or Pascal’s God-shaped hole rehashed. Likewise, she deflects his metaphors. She is not a bird but a human being. Nothing human disgusts her except if it’s unkind or violent. What extraordinary statements they are, and Kerr delivers them with a perfectly composed performance.

As each person tries to decipher their own religion or least some semblance of existential understanding, whether through legalism, drink, or sex, even cutting Iguana’s lose as a private act of personal Godship, she’s the one character who brings down the thoughts and words of the wise and makes them feel foolish.

For a film suffused with a great deal of religiosity, she’s startling unprepossessing. And yet in her words and in her humanity are the roots of something bountiful and beautiful in their very simplicity. It’s the kind of simplicity that can help loosen the Iguana from the hitching post, where we find out by sojourning, it’s possible to fill up the vacuum inside each and every one of us.