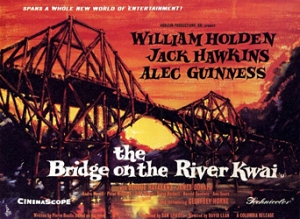 Starring Alec Guinness and William Holden with director David Lean, this is a World War II film that follows the exploits of British POWs and also Allies on a secret mission. Guinness is the proud and principled British Colonel who leads his men in a memorable entrance. With stubbornness he wages a war of wits against the Japanese camp overseer. He inspires his men and eventually reaches his goal of personally leading them in the completion of the bridge. At the same time an American soldier (Holden) attempts escape and somehow winds up alive and safe. However, all too soon he is sent right back with specialized commandos to destroy the bridge. In a chaotic and tragic finale, the British colonel puts a wrench in the plans and the implications are costly even though the objective is achieved. This is a magnificent and enjoyable film with good cinematography, interesting characters, a two-sided story, and of course whistling!