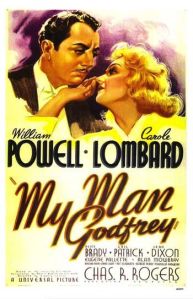 Starring William Powell and Carole Lombard with a zany cast of others, the film follows a funny socialite daughter who takes a “Forgotten Man” as her family’s butler. Godfrey takes the job and soon learns how to cope with the scatterbrained girl, her stuck up sister, their ditsy mother, their long suffering father, and Carlo who is the man patronized by Mrs. Bullock. On accident Godfrey comes in contact with an old friend and his secret almost comes out. In the cover up Lombard’s character believes him to be married with children. Because she loves him, she goes away to Europe to try and forget him. However, upon hearing the truth, she is ecstatic and Godfrey finds himself being married all of the sudden. This is a good example of the screwball comedies of the 1930s and I will admit, it is a pretty good film.