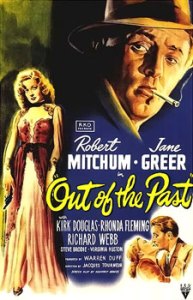 Starring Robert Mitchum, Jane Greer, and Kirk Douglas, this classic has every element of a good film noir.   Jeff Bailey (Mitchum) makes his living in a small town working at a gas station. He has an honest living and a girl. However, soon his past catches up with him when a man from his former life comes to see him, and he must explain it all to his innocent girlfriend.

Once he was a private investigator, who got mixed up with a powerful man named Whit (Douglas). He wanted some money found, but most importantly he wanted a deadly girl brought back to him. Pretty soon Jeff’s searching leads him down to Mexico. He has a chance meeting with the beautiful woman (Greer), and he understands why Whit wanted her back.

However, Kathie is not eager to go back, and they are attracted to each other. She and Jeff agree to run off together to San Francisco — away from the searching of Whit. They are nearly found out, but they get away. San Francisco is not a nice place, but they make do, until the day where Jeff is spotted by his old partner. He must split up with Kathie and they set a rendezvous. Only there is a hitch in the plan that Jeff did not foresee. He tries to deal with it in his own way, but Kathie takes more drastic measures. She left him there and went out of his life, or so Jeff thought. He had tried to forget his past dealings, and yet they creep back into his life. With a murder pinned on him, Bailey can do nothing but go along with Whit and Kathie. Soon he becomes embroiled in more treachery and backstabbing, which all has to do with the manipulative femme fatale.

With one last entreaty, she urges him to flee with her since they both have dark pasts. In the end, Kathie’s fanciful plan to escape is foiled by Bailey and it soon turns fatal. One last time she tried to control the situation, but this final time Jeff, or at least fate, got the best of her. After his violent death, Jeff’s girl wishes to know once and for all if he was running off with Kathie. A mute boy (Dickie Moore), who knew Jeff well lies so that the girl can continue her life. Because in Jeff’s case the past came back to haunt him. The kid goes back to the station, but not before looking up at Bailey’s name on the sign, because he did what Jeff would have wanted.

With its dialogue, extended flashback, voice over, and femme fatales played by Jane Greer and Rhonda Fleming, there are not many noir experiences better than this one. Obviously, the chiaroscuro cinematography is a major aspect of this film. Except for the shots in Bridgeport, it seems like every scene is veiled in shadow whether it takes place in Acapulco or San Fran, at day, night, inside, or out. Shadows are perpetual and they seem to reflect not only these characters but also the story. They are not easy to figure and none of them can ever be fully trusted.

Mitchum is perfect in the role of Jeff Bailey, thanks to his demeanor, his fitting voice, and the constant attire of a trench coat and fedora, with a cigarette clenched in his teeth. He is a man who looks like a saint compared to his acquaintances, and yet he is a man who can show a complex set of traits ranging from avarice, cruelty, love, and sometimes heroism. Kirk Douglas is great in his role as the crooked Whit, who acts the nice guy only to be cruel at heart. Every character from the henchman Joe, to the mute boy, the accomplice Meta  Carson, and even the loyal taxi driver are all memorable in the scenes they show up in. Jane Greer stands out, however, because she is one of the most notorious femme fatales in any noir. I think she toys with the audience as much as she does with Jeff. We find ourselves starting to believe her, then we have our doubts, and then we go on believing her again. It is a fine performance.

“She can’t be all bad. No one is.”
“She comes the closest.”
~ Ann and Jeff talking about Kathie