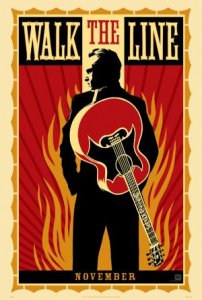 Starring Joaquin Phoenix and Reese Witherspoon, this biopic opens with Johnny Cash recalling his past as he gets ready to perform at Folsom prison. JR is the son of an abusive share cropper and his brother Jack dies when he is just a boy. He goes off to Korea and comes back with a few songs under his belt. Cash marries his girlfriend and they move to Memphis where Cash tries to get work. On a whim he tries to form a gospel band to audition at Sun Records. Initially it goes poorly until Cash begins to Sing Folsom Prison Blues. Soon Johnny Cash and The Tennessee Two are signed and touring with many different artists. There Cash meets the likes of Jerry Lee Lewis, Elvis Presley and of course June Carter. Cash begins to fall for the recently divorced Carter but she rejects his initial advances leading Cash to go to drinking and drugs. They part ways but then later on they begin to tour again. His music is a success but his relationship with June causes his marriage to go down the tubes. He continues to takes more pills. This is the low point in his career but June gives him a second chance. They perform together at Folsom in 1968 and then after one rejection of marriage, June finally accepts while they are performing a duet. The two of them continue to perform and raise a family together. Phoenix was commendable as Cash and Witherspoon’s vivacious performance gave life to this film. One things is for sure, johnny Cash had a hard life that was full of mistakes. That’s what made his music so good. It was often personal and most importantly human. Because humans make mistakes. Thank you Man in Black for giving us what you did. 4/5 Stars