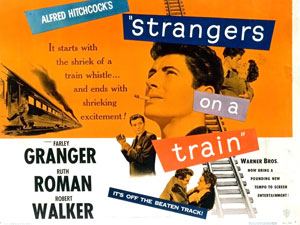 In one of Hitchcock’s most intriguing thrillers, we watch events unfold as two distinctly different men meet each other. One is an unassuming tennis player and the other a wild-living rich kid. They both have the same desire though, to have someone out of their lives. With this in mind, Bruno proposes swapping murders. He will kill the tennis player’s unfaithful wife and Guy in turn will murder Bruno’s domineering father. Bruno goes ahead with the plan while Guy brushes it off and soon forgets it. Only too late does Guy find out what has happened and he is suddenly faced with a great dilemma . He does not want to commit murder but Bruno relentlessly shadows him expecting it to be done. In the final showdown the two men face off and Bruno is still adamant that he and Guy were always in it together. This film is great for many reasons, including the often unconventional cinematography, the intriguing characters who blur the line between good and evil, and of course the carousel scene at the end is always memorable. Farley Granger and Robert Walker both deliver very good performances that are probably the best of their careers.