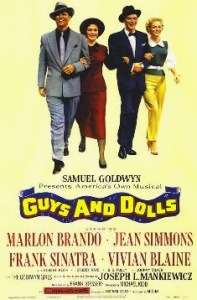 Headlining this film are Marlon Brando and Frank Sinatra as Sky Masterson and Nathan Detroit respectively. Both men are high stakes gamblers and things have heated up in town because the police are trying to crack down on a floating crap game. That’s not the only thing that turns hot though. Masterson is bet by Detroit that he cannot get a sidewalk missionary (Jean Simmons) to fly with him for an evening in Cuba. Detroit has his own problems brought on by his reluctance to marry the girl he has been going with for 14 years. All along the way money constantly switches hands and “markers” are doled out as IOUs.

Both Masterson and Detroit ultimately show their noble sides and as you would expect the guys get the dolls.

This musical certainly had its moments and it looked lavishly beautiful in color like many of the contemporary musicals. I will say that there were some great personalities here including Vivian Blaine. However, Brando seemed painfully out of his element here and I’m pretty sure Sinatra had better roles. I wonder what this film would have looked with a different cast? We can only speculate now.

Also, the dialogue almost completely lacking in contradictions was quite noticeable, but I’m not sure if that was a bad thing or not. Overall I think this one would be better for the stage than on film. But don’t get me wrong a lot of the numbers like Sit Down You’re Rocking the Boat were catchy. I will say I was surprised that Brando ended up singing Luck Be a Lady and not Sinatra. I had previously only heard the Sinatra version.