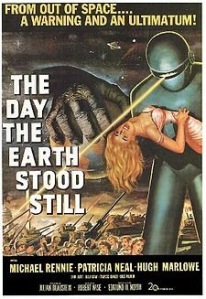 Starring Patricia Neal and Michael Rennie with direction by Robert Wise, this sci-fi film begins with the landing of a mysterious alien space craft in Washington D. C. At first nothing seems to happen and the whole country is tense. Then an extra-terrestrial named Klaatu gets off followed by his giant cohort Gort. He comes in peace but he is wounded by a frightened gun. From that point he is taken to a hospital but his only mission is to warn the world that they must change their ways.

Klaatu gets away from the hospital and he takes up the identity of one Carpenter in order to integrate himself so he can give the people his message. He ends up befriending a widowed lady and her small boy with his quiet kindness.

His goal is still to deliver a message to the leaders of the world and the man he wants to speak to is Professor Jacob Barnhardt (Sam Jaffe). When he finally is able to talk, he warns against the use of atomic power, because other planets have become apprehensive and will surely neutralize the earth if they do not stop.

He is followed by Bobby and Klaatu finally reveals his true identity to Helen. Soon he shuts down all the non-essential power across the country, and when the chaos dies down, the manhunt for the culprit intensifies.

In his final entreaty before leaving earth Klaatu pleads with the people:

“It is no concern of ours how you run your own planet, but if you threaten to extend your violence, this Earth of yours will be reduced to a burned-out cinder. Your choice is simple: join us and live in peace, or pursue your present course and face obliteration. We shall be waiting for your answer. The decision rest on you.”

So ends a film that was not just another sci-fi flying saucer movie of the 1950s. It was a representation of the atomic age and an indictment of the Cold War sentiment at the time. Klaatu in many ways becomes a Christ-like figure who calls for peace, takes the name “Carpenter,” and even rises from the dead. In many ways he saved humanity too, on the day the earth stood still.