It is now the first time through and Tykwer brings back the animation by depicting Lola’s descent down the stairs with cartoonish images further developing this fanciful world. When she enters back into the real world the race is on and the upbeat score is dominant at this point and it keeps rhythm with the movements of her body. Arms pumping, legs churning, chest heaving. Despite all this repetition it does not seem to become more monotonous, it simply ups the tension with each gesticulation. Interestingly Lola crosses paths with the same people during each of her runs. Instead of having each encounter develop the same way, Tykwer changes up the results each time. He ingeniously gets around the restraints of conventional narrative by using rapid sequences of Polaroid photos to represent what will happen after Lola leaves the frame. Thus, this is yet another way in which we see how minute details will be manipulated to completely alter the future. For instance, Lola bumps into a lady with a small child and then Lola is followed by a man on a bike. The woman curses her out angrily but ironically we see that her baby is taken from her and she commits a kidnapping. Then, the man on the bike actually stole it so he is beaten, goes to a café, finds love, and is married. These potentially drawn-out scenes actually happen in a matter of seconds thanks to snapshots, and the speed is retained as Lola continues to sprint towards her destination. Everything is moving so fast that our brains might possibly get left behind trying to process it all and yet miraculously it works for the most part.
The power of chance is further evident when Lola is nearly run over by a businessman and then passes a homeless man on a street corner. As an audience, we do not know it yet but he will play into a later story, right now his only outcome is that he crashes into another car. With the homeless man, on the other hand, we know he was the one with the money and ironically Lola does not give him a second look. All the time that she sprints, flashing by in her peripherals are scenes of modern Germany. There is the ever-present construction, brick buildings, concrete pillars, signage, and urban life. It gives the impression of a car ride with images zooming by for an instant, closely followed by a continuous line of other objects. The adrenaline rush of Lola is contrasted with the scenes in the bank where Lola’s father is having an intimate conversation with his lover. The two moods clash as the frantic girl bursts on the scene asking for money. Here this narrative thread takes its first twist. Lola’s father abruptly disowns her revealing she was born by another man and then she is thrown out. This seems hardly realistic and yet it fits the themes of Run Lola Run. Almost anything can happen and it can be attributed to chance or fate.  This frees Tykwer up by giving him tremendous narrative freedom to examine these topics in any way he’s sees fit. And he does that by continuing the race to Manni as time continues to run down.
Before Lola can get to him, Manni crosses the street and holds up the market there. She implores him, “Why didn’t you wait for me?” His answer is simple. “I did, you got here too late.” This perfectly sums of the whole sequence (Run Lola Run). If only Lola could have run faster or had just caught the bum, or if Manni waited only a moment longer. Then again Lola could have easily been injured by the car that almost ran over her. Eventually, she and Manni do get away as a light song plays in the background with the words, “What a difference a day made. 24 little hours” (Run Lola Run). This is an ironic statement especially after what ultimately plays out. The final moments of the run include accidental events of great consequence. Earlier the gun Lola has discharges and then a policeman accidentally fires, mortally wounding her. Here is a moment reminiscent of a Jean-Luc Godard crime film that always seems to take a turn for the worse. However, in Lola’s case, she again seems to exhibit superhuman powers. Before dying she whispers that she does not want to leave and then she literally orders time to stop. Run number two begins soon after. 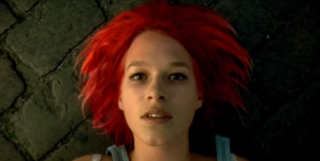 Although Tom Tykwer’s most acclaimed film to date has been Run Lola Run, he has made other films both in Germany and internationally. His two pre-Lola films were Deadly Maria (1993) and Winter Sleepers (1994) which follow a repressed introverted woman who lashes out and then a group of people during a mountain blizzard respectively. With The Princess and the Warrior in (2000), Tykwer was reunited with Franka Potente, and then with Heaven (2002) he got his first chance at an international film, which starred Cate Blanchett and Giovanni Ribisi. His two other major efforts in the 2000s were Perfume: The Story of a Murderer (2006) and The International (2009). The first is an adaption of an acclaimed book and as the name implies it is about a perfume obsessed murderer. The second film teamed Tykwer with Clive Owens and Naomi Watts in a thriller about an Interpol agent. However, Tykwer’s most commercially successful film came relatively recently with Cloud Atlas (2012). The sci-fi, fantasy flick, starring Tom Hanks and Halle Berry, shares many of the themes of Run Lola Run as isolated events affect the past, present, and future in a span of 500 years. His upcoming project called A Hologram for a King will also star Tom Hanks (www.tomtykwer.com). Although he has never matched the heights of Lola, Tom Tykwer still shows an interest in intriguing topics, especially having to do with time and the potential consequences of actions. The good news is that he is not done creating so there are potentially some really good ideas left in his brain that he can bring to the screen. We will just have to wait and see.
All in all Run Lola Run has everything you could possibly want packed into barely 80 minutes of film. Tom Tykwer gifted us an avant-garde thriller full of questions on chaos theory, German cultural allusions, inventive narrative, and a colorful heroine. It was composed through a deft amalgamation of cinematography, editing, music, plot twists, and a great deal more. He knows the masters whether it is Joseph Von Sternberg or Alfred Hitchcock. He knows where German film has been before during the Weimar Era and The New German Cinema. However, perhaps more importantly as Barbara Kosta puts it, “Tykwer belongs to a generation of Germans that embraces popular culture rather than criticizes it as colonization of the mind and a form of cultural imperialism” (Kosta, 165). Thus, he is not a part of the New German Cinema but rather the German cinema which is new right now. Run Lola Run did for Germany what Breathless and Rashomon did in those countries. Critics can argue all they want about the degree that this is true, but the fact is that Germany has a film history, and they also have a future. Run Lola Run is just the first snapshot in this whole collage of contemporary German films that have been brought to our culture’s attention.