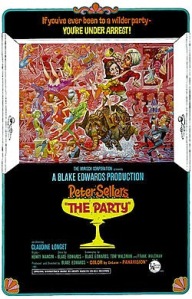 When you begin to watch the Party it becomes obvious that it is less of a comedy film and more of a comedy concept. Peter Sellers in all his glory is a bumbling Indian actor who is mistakenly invited to an elegant party. He is in many ways very similar to Mr. Hulot. Both are likable mess ups who are constantly getting themselves into trouble.

I am of the opinion that Seller’s comic genius alone could carry a film. However, the Party has a great multitude of weirdos and snobs that create a great comedic collaboration. Possibly the best example would be the constantly inebriated waiter. Furthermore, by the end the Party is no longer distinguishable and it culminates in a surreal world of bubbles and groovy music. This was the only collaboration of Sellers and Blake Edwards that was not Pink Panther and it honestly is not half bad! We even get a performance from a young Claudet Longet.

This is one of those films that might be lacking in plot at times but it is more fun simply to sit back and watch the fireworks begin.