Max Ophul’s Caught is an interesting mix of soap opera drama and dark, brooding noir. It follows aspiring model Leonora Eames (Barbara Bel Geddes), who is obsessed with improving herself through charm school, landing a modeling job, and finding a rich husband. She’s not the only one in a world of young pretty girls who thinks money makes the world go round.

She’s a little bit different than the others, but they have slowly made her buy into the whole system. Then, one night she gets what all these gold digging girls could only dream of, she meets the filthy rich and oddly-named Smith Ohlrig (Robert Ryan), and it’s all quite by accident.

Soon more to prove a point than for love, Smith marries Leonora, and she tries her best to love him like a good wife. But he’s too busy and too difficult to get close to. She spends all her days stuck at home and unhappy with Smith’s hired aide Franzi Kartos (Curt Bois). Leonora realizes she needs something else and heads out to get a job away from Smith and his money.

The first opportunity she gets is as a receptionist for the doctor’s office of a kindly young pediatrician and his older colleague across the hall (Frank Ferguson). He pegs her as an odd applicant from the beginning but allows her to come on and work. Once she commits, Leonora proves to be a hard worker and she and Dr. Quinada (James Mason) hit it off, though he still finds her peculiar. 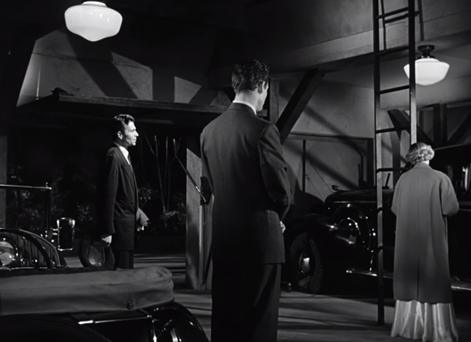 Once more, Leonora tries to patch things up with Ohlrig who begs her to come back home, which she does. Because she wants their marriage to still work out. However, Leonora also gets some big news from a doctor that complicates the situation. She truly is caught. She cannot leave Smith due to their marriage and other difficulties while her affections truly lie with kindly Dr. Quinada who feels the same.

Ultimately, there has to be a showdown and so there is. Leonora has to make her decision. Then Smith has one of his angina attacks and she doesn’t want to help him. It causes her increased guilt and ensuing complications. But Ohlrig doesn’t die and Leonora finally has the future she wants with Quinada.

Max Ophul’s was always a master with these types of melodramas and his trademark dolly shots are as prevalent as ever, developing some of the scenes wonderfully. It becomes more than a plot but a visual presentation too, and the shots often are augmented by how he moves in and about a room.  Robert Ryan steps into the villainous role easily and James Mason is a surprisingly amiable good guy. Also, though his role is small, Frank Ferguson is nonetheless pivotal and thoroughly enjoyable as a fatherly figure. Of course, Barbara Bel Geddes is a worthy protagonist, because she is ultimately the one trapped between her two male counterparts and she is the one who goes through the most mental torment with Ohlrig potentially being close behind.

Above all, Caught is a timeless indictment not simply of corrupt capitalism but a generally misguided philosophy that money is everything. Quinada has the best approach, realizing that money is necessary, but it can never buy you happiness or remedy your relationships. Smith never figures that out and it is difficult for Leonora to leave that worldview completely behind — as it is for many of us.