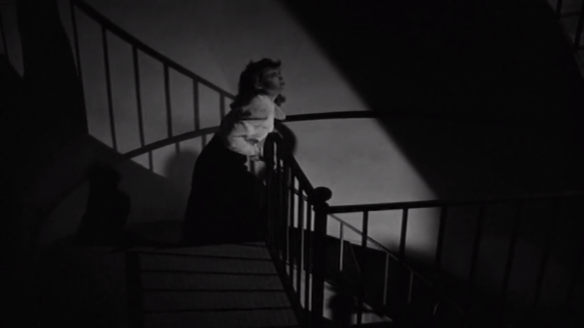 The Spiral Staircase plays out like an Agatha Christie murder mystery with a moody, old mansion acting as the backdrop and numerous individuals filling out the cast. It seems to be some type of gothic-noir hybrid, with its ghostly interiors, torrential thunderstorms, and creaky shutters. However, with director Robert Siodmak at the helm, I am inclined to call it noir, not just because of his pedigree, but it certainly has the atmosphere and dim interiors that are expected of the genre.

The action opens at a movie hall after a woman is murdered by an unseen killer. But most of the actual drama takes place in the before mentioned mansion of the sickly Mrs. Warren (Ethel Barrymore). She resides with her son Steven and step-son Professor Albert Warren (George Brent) who never see eye to eye. Nearly on her deathbed, Mrs. Warren distrusts her nurse and only allows the mute girl Helen (Dorothy McGuire) to even help her. The rest of the cast is rounded out by servants, a secretary named Blanche (Rhonda Fleming) who Steven loves, and the constable and a young doctor who cares about Helen. It’s a wide array of figures and we quickly begin to analyze them for any hint of killer tendencies. 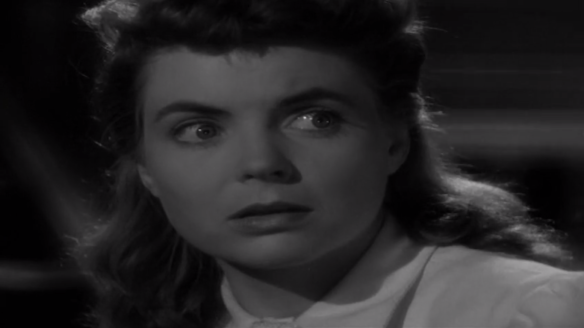 In fact, Helen is our main character and we experience much of the film from her perspective. The truth of the matter is that all the girls who were killed had some sort of defect, so the line of reasoning is that Helen might be next in line. It seems all too possible with a pair of mysterious eyes constantly watching from the shadows, but Helen does not heed Mrs. Warren’s advice to flee.

The film ultimately spirals into darkness as the killer takes one victim and looks for another. Helen must protect herself, while also confronting her past where the source of her muteness lies. Although simple in conception, The Spiral Staircase is no less an engaging mystery. It is not the best from Siodmak either, but Dorothy McGuire gives an expressive performance that deliverers so much heart and feeling without the use of words.

However, the film does ultimately allow her to find her inner voice in the midst of all the silence. She finally conquers the fear in the moment when it is most harrowing. Although her role is rather minor, Rhonda Fleming is as strikingly beautiful as ever. It’s a rather expected resolution, but there are enough quirks and twists to makes things enjoyable to the end. It goes without saying that gothic noir most definitely should be a thing if it isn’t already.