There is so much that could be talked about with Through a Glass Darkly, but I feel the need to point out the more obvious, to begin with. Ingmar Bergman, in retrospect, envisioned this film as the first installment in his 1960s trilogy. As such, the film is a chamber piece that takes place entirely on a single island with only four main players. It lets go of some of the symbolism of many of Bergman’s films, but it still surges with religious content that reflects Bergman’s own background and spiritual conflict.

Through a Glass Darkly is one translation of 1 Corinthians 13, essentially suggesting that at the present time we only get a poor reflection of what is to come. In other words, we cannot fully understand the ways of the world and the ways of God. But how does this theme relate to the film you ask? That’s what I wanted to know as well.

At a basic level, this is yet another story about family and interpersonal relationships. Karin is staying on an island with her husband Martin (Max von Sydow), her father David (Gunnar Bjornstad) who is an author, and her baby brother Minus. She recently was released from a hospital for schizophrenic-like symptoms while her father has recently returned from Switzerland trying to combat a fierce case of writer’s block.

In a day’s time, these four individuals try to parse through all that is going on. Though they initially attempt to shroud it with morning swims and silly stage productions, they cannot completely disregard their reality. 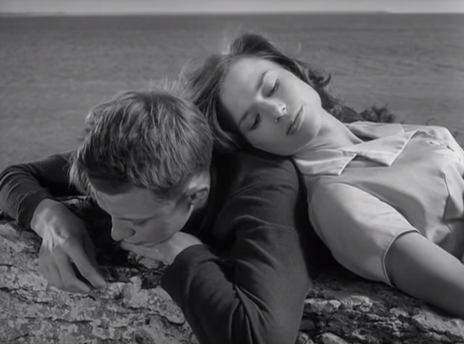 Minus feels he is lacking love and affection. He feels like his sister makes fun of him while his father is aloof and withdrawn from his life. Meanwhile, David is grief-stricken in private, realizing that his daughter’s condition is incurable and yet he also regrets his morbid fascination with it. David tries to cope with his wife’s condition, but although she seemed jovial and fine at first, Karin’s situation begins to decline.

She hallucinates, speaks of going through the walls, and faints. Matters are made worse when the voices in her head tell her to go through her father’s diary. There she reads about his thoughts on her and her “incurable” state. When they take a boating outing Martin asks his father-in-law about what he wrote on the request of Karin, and they get into a discussion. As Martin surmises he seems to be a man with all the right words, but no clue about life itself, and David does not try and object.

Back on the island Minus is with his sister, who confides in him about the voices, and when a storm hits she hides dejectedly in the hull of a boat. Minus follows soon after along with his father. They send for an ambulance to fetch Karin and in a penultimate moment, she speaks candidly with her father one last time before she is to be taken to the hospital. In these final moments she goes up to the attic and while being observed by her husband and father, Karin, breaks into hysterical fits. The visions she has seen are obviously too horrible to bear 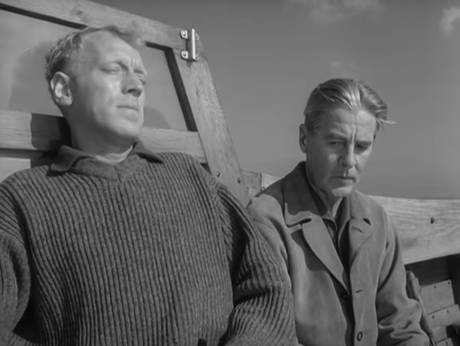 This is a film about brothers, sisters, husbands, wives, fathers, and daughters. All revolving around four characters wrapped up and intertwined in this complex spider web of relationships. The spiritual content is great and there is also a lot of minutiae in Through a Glass Darkly. It shares some of the same mind-bending moments as Persona (1966) and yet this film felt even more personal if that is possible. As the title suggests and David even tells his son, we cannot fully understand what is happening, but we can be certain that someday we will know if only we grasp hold of love and the love that God has for his people.

Ingmar Bergman’s type of film-making seems foreign to us now and I don’t mean simply since it’s Swedish, but due to the fact that it is so connected to issues of spirituality and deep questions of faith and love. He cannot and will not allow his work to be cut and dry, because he cares about delving into the human condition. And that condition by default is chock full of ambiguity and complexity. Through a Glass Darkly. The title fits aptly indeed.