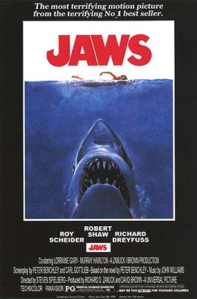 Alfred Hitchcock once was quoted as saying, in typical Hitchcockian fashion, “There is no terror in the bang, only in the anticipation of it.” A young Steven Spielberg channeled this type of sentiment when he directed the smash hit and archetypal summer blockbuster Jaws in 1975. It’s still a cultural phenomenon and for good or for bad, it has forever instilled a fear of great white sharks in the general populous.

The film is a man-versus-beast type of story. It starts off on Fourth of July weekend on a New England resort town named Amity. After a girl is found the beach chewed up, it starts a frenzy. Well, not quite initially because although police chief and mainlander Martin Brody (Roy Scheider) wants to shut down the beaches, the local mayor will have nothing of it. Really, the first half of Jaws is very much political, as the mayor attempts to do anything he can to keep the masses flocking to his town because Amity gets all their revenue from the summer months. Meanwhile, Brody has the beaches monitored, but that does not stop a young boy from getting attacked. Up until now, we have only seen the handiwork of the beast, but in a brief instant we can catch a glimpse of him and it is shocking.

The vacationers flee the shoreline, and Brody is left to answer to the boy’s mother since he did not close down the beaches. She holds him responsible. However, Brody’s hands are still tied, especially when local fishermen catch another shark that they assume is the culprit that has terrorizing the town. He is met by a young marine biologist named Matt Hooper (Richard Dreyfuss), who also realizes the gravity of this shark problem. No one will take him seriously except Brody, and Hooper labels him the only other sane man on the island.

Because all the precautions that are taken cannot avoid still another shark attack from going down. And it is at this point that Brody and most certainly the Mayor, have to change things. At a tense news conference, they must walk a fine line in order to assuage the locals and the business owners. Ultimately, Brody convinces the mayor to let him go out with the salty veteran seaman named Quint (Robert Shaw) who agrees to take the shark down for a fee.

For most of us, the second half is what we all remember or at least equate with the film (probably for the iconic line, “We’re going to need a bigger boat.” It is this part of the story that breaks the adventure down to three men, our stars, going off on a mission to take on the terror of a great white (ie. “Bruce”). It feels very Captain Ahabesque, thanks to the addition of the grizzled fisherman Quint, but if he is a stabilizing force it soon becomes obvious that not even he is fully ready to take on this behemoth creature. It seems like no amount of barrels, harpoons, or even a “shark-proof” cage can humble it.

What we end with is utter destruction that spirals out of control. That’s what makes this shark such an intriguing foe because we certainly cannot really call it evil, but it certainly is an overpowering force of nature. Brody stands in for many of us who have an innate fear of the ocean and what lies underneath the surface. For all the plucky young adventurers they have a stand-in in Hooper. I am struck by how tense this film is even to this day, and Spielberg never seems to show is hand too early and he never gives us too much of the shark. Otherwise, it might look faker, and it would lose that heightened anticipation. Above all, John Williams lent a great deal of potency to Jaws, single-handedly, with his ominous score. Without his score, Jaws is nowhere as scary and certainly not as memorable.