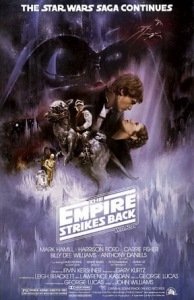 Growing up, Star Wars was my life. I lived, ate, slept, and dreamt Star Wars. But notably, Empire Strikes Back was always my least favorite film in the original trilogy. In truth, it scared me because it showed a different side to this galaxy. It seemed to be ignoring the unwritten rule that good should and will always prevail over evil.

Now I know better than that. Every great film trilogy needs that moment where it delves into the darkness and scours the depths of despair. it’s in these moments that characters become solidified, pun intended, and we truly begin to care for them on a deeper level.

Because Empire Strikes Back is certainly a film about darkness; that’s part of the reason why I shied away from it growing up. But such evil always seems to reveal the polarities of nature.  To balance out the dark side there must be light. Heroics, sacrifice, and friendship come to the forefront because baseness calls for such a response from our protagonists.

Another reason I was not always a fan of Episode IV was rather shallow, I admit. Planets like Hoth, Dagobah, and even Bespin were just not as thrilling as Tatooine and Endor for some reason. That still holds true to some extent, but now the first issue I touched on takes greater precedent.

It’s in this story where the Rebels are struggling to survive, fleeing Hoth desperately from an Imperial garrison that seems largely regrouped and unfettered by the destruction of the Death Star. All seems bleak and hopeless once more. Things begin with Luke being kidnapped and dragged off to a Wampa lair. He almost gets crushed by an incoming AT-AT as his buddies get fried, and finally, he crashes his X-Wing into a swamp searching for a Jedi Master who is little more than a green muppet. It’s not much of a hero’s journey, or more precisely it’s a journey full of pitfalls and failures.

Meanwhile, sparks are flying between Han and Leia, not because of their chemistry, but their complete lack of any chemistry. He’s a scoundrel and she’s an aloof princess hardly enamored with his show of bravado. After all, he pilots a heap of junk and walks around with a furry walking carpet prone to fits of rage. C3P0 is at best comical every now and again when he’s not overly annoying. R2D2 is a spunky dynamo like always.  These hardly seem like complimentary words, and it’s hardly thoughtful commentary, but it sets the stage for brilliance.

The plot is contrived just as Vader contrives to lead Luke right into his trap. On both accounts, it works to perfection. Bespin becomes the perfect place for some major truth-bombs. The most obvious one pertaining to a certain person’s father. But we also see the evolution of Han and Leia’s relationship. We see the true camaraderie between Han and Chewie, and the real nature of Lando, another scoundrel with a heart of gold, much like his buddy Han. Finally, we find out that Leia has extraordinary powers of her own.

On a purely cinematic level, The Empire Strikes Back introduces us to our first real lightsaber battle we ever got and it never disappoints. True, Vader and Obi-Wan faced off, but that was more symbolic in nature. The bout between Luke and Vader was the next step, necessary for this story to progress. Luke has fallen and failed this time as the power of the dark side is too strong for him, but this is only the beginning. Any great trilogy must enter into the darkness certainly, but there’s also an ending to the story. Completely different than what came before. In this case, the Jedi will return prepared to bring order to the galaxy as it is meant to be.

Thus, I wasn’t completely against The Empire Strikes Back as a kid, because I knew it wasn’t the end of the story. We leave our characters on a hopeful note as they survey the vast galaxy in front of them. It’s far from being redeemed, but it’s also not too far gone. This is a space western for the ages with dramatic storytelling, twists, and turns worthy of one of the great series of our generation. Let’s just take another moment to salute John Williams too. Without him, Star Wars is far less. He makes this world of George Lucas come alive.