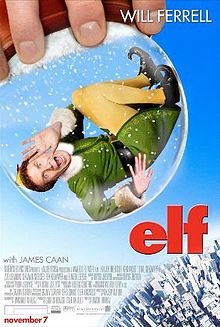 “The best way to spread Christmas Cheer is singing loud for all to hear.”

Elf is truly a Christmas miracle. It’s a relatively modern Christmas classic (a bit over 12 years old) that holds its own in a season usually dominated by old perennial favorites. Yet, again and again, it constantly excites, mesmerizes, and bedazzles in more ways than one.

Will Ferrell is the major treasure of Elf because, without his child-like wonderment and sincerity, this film could go downhill all too quickly. Buddy walks into female locker rooms, walks around New York in an Elf suit eating discarded gum, and calls his grown-up father “daddy” in a musical serenade, after all. But to his credit, Ferrell goes for it wholeheartedly completely engulfing himself in a magical realm that bewitches every other character who decides to join him. Everyone else walks in abject reality, but Buddy like Elwood P. Dowd (Harvey) or Dudley the angel (The Bishop’s Wife) exist outside of that and when they rub up against everyone else, they leave everyone, including the audience, changed.

From the outset, Elf comes right out of a storybook as Papa Elf (the venerable Bob Newhart) recounts how a human and his adopted son saved Christmas. Of course, it starts out as a sorry tale, because truth be told Buddy cannot figure out what his purpose in life is. What is he good at? What are his talents? For all the other elves it’s obvious: they make toys.

But when Buddy finally learns of his secret past he leaves his papa behind in a tearful goodbye, gains some sage advice from Santa (the equally venerable Ed Asner), and heads off on an iceberg to find his real father in the Big Apple.

There must be a catch, and there is a small one, Buddy’s father Walter Hobbes (James Caan) is on the naughty list. In fact, he’s a real Scrooge working slavishly day after day as a children’s book publisher. But you see Buddy doesn’t see people for their faults and that’s the secret of Ferrell’s success because his innocence and irrepressible will towards his fellow man is contagious. New York might be a culture shock and Hobbes as well as his young boy Michael are not too thrilled with Buddy’s arrival, but that’s because he’s so foreign – so nice. Ultimately, he becomes the best thing to happen in their life.

In truth, Buddy goes transforming New York systematically whether it’s the Hobbes’ home, Gimbel’s Department Store, or wherever his feet take him. And of course he finds love in his world-wearied coworker Jovie (Zooey Deschanel) and saves Christmas, but that’s nothing unexpected. It’s not the results, but how we get there that counts – all those quotable moments in between.

Too often I feel bludgeoned to death by all the new takes on the Christmas season annually jostling for my affection. But the beauty of Elf is that it pays its respects to the past, thereby solidifying its own timelessness in the present. It doesn’t have to be the next big thing, but it is something that I would gladly sit down and watch annually, because of its spirit and seasonal charm. We get nods to A Christmas Story and Ralphie, an homage to George Bailey on the Bedford Fall bridge, and even Miracle on 34th Street (Buddy working at the rival Gimbels).

The music never steals the show but it does accent some sequences nicely including the voices of Louis Prima, Stevie Wonder, Ella Fitzgerald, Frank Sinatra, and so on. Each character fits well in director Jon Favreau’s narrative. The manager (Faizon Love) is a crack-up. The hired Santa (Artie Lange) is a thug. Peter Dinklage is an angry elf. James Caan is grumpy and cynical. Zooey Deschanel is pretty and cynical. Ed Asner is an endearing grouch. Bob Newhart has his usual stuttering charm. And Ferrell wraps it all up nicely with a pretty bow. Although it does completely sidestep the origins of the Christmas holiday, Elf does what it set out to do very well. It exudes Christmas spirit unabashedly.

“Christmas spirit is about believing, not seeing.” – Ed Asner as Santa