Without any prior knowledge and given what we know to begin with, it looks like Atonement will be a love story revolving around the characters of Keira Knightley and James McAvoy. They are, after all, the big stars in this WWII era romance based on the Ian McEwan novel. We expect to become enraptured in their passionate love affair that is to be indubitably broken up by war. However, it becomes evident very quickly that this is really a tale about a young girl  and budding author, played through the years in succession by  Saoirse Ronan, Romola Garai, and Vanessa Redgrave. It is her point of view and her part in this narrative that becomes most important, although we do not have any indication as to why to begin with.

So in front of the peering eyes of Briony Tallis, her older sister Cecilia (Knightley) and the son of the family housekeeper Robbie Turner (McAvoy) start something which Briony cannot fully comprehend and understand. What is it that is really going on around her? An intricate manipulation of time and place begins, relating the story from a number of perspectives, but always returning to Briony. How does Cecilia really feel towards Robbie, who is in a sense below her, but still proud? Briony knows she has feelings for the housekeeper’s son, but how is she to react when she finds her sister and Robbie crammed up against the bookcases together. Then, when a pair of pesky twins goes missing a search party begins. Again Briony sees something that she cannot fully understand, and yet she makes a judgment that will unwittingly tear apart two lives. There is constantly an inquisitiveness, a confusion in her expressions that is absolutely spot on.  And in these moments the score is suffocating with its pounding, clanging, and banging.

Robbie gets sent away, torn from his love Cecilia, and Britain is on the brink of war. When the two lovers finally get a chance to see each other, he has joined the army in order to be released from prison, and she is working as a nurse.  But it’s a heartbreaking separation because although the passage of time is condensed for us, we can easily see the reserved, hesitant quality in both of them. How are they supposed to react? It’s difficult to hold onto the same feelings, maintain the same type of passion when you’re separated by the years. Cee reaches out to touch his hand, and he avoids her slightly. You cannot exactly blame him, but there is a tinge of sympathy for her.

But their romance is quickly renewed and heightened once more in a matter of days, only to have the war this time pull them apart. And it’s something that’s very hard to rebound from. Robbie ends up in the middle of France and when he finally discovers the coast with a couple of comrades they come across all the forces at Dunkirk getting ready to retreat. For those engaged with WWII history, Dunkirk was in one sense a wounding blow to the English ego, but also a testament to their resilience. The men are beaten and battered, but escape the Nazi onslaught to fight another day. And yet we don’t see the fighting. With a wonderfully dynamic tracking shot director Joe Wright gives us an eye into the tired and wounded masses. And it’s somber, chilling, melancholy, and still strikingly beautiful in the same instance. 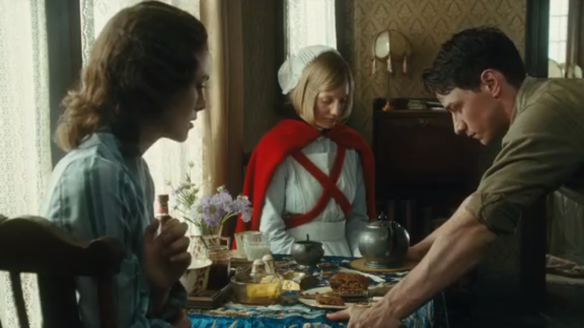 Back home, Briony is now working in a hospital almost as penitence for wrongs and soon the hospital is inundated with wounded from the retreat. She is quickly thrown into action comforting a dying French soldier with a penchant for the soft refrains of Debussy. Then, comes the pivotal confrontation where Briony, now older, faces her sister who has refused to talk with her. And Robbie is there too. Together they painfully and angrily point out what the young girl had done to both of them. It’s heart-wrenching to the nth degree and yet the final revelation makes it all the more painful.

Now many years down the line, Briony, who is now much older (Redgrave) and an author of 21 books, is interviewed about her final novel Atonement. It lays out the events of the whole film, and she explains her reason for writing such a story. She wrote it to be read by the public certainly, but most importantly she wrote it for Robbie and Cee. To give them closure and the dignity that they deserved.

So you see, it’s the book within the book really or more correctly Ian McEwan writing a novel called Atonement featuring a fictitious version of the same work. In a sense, I do feel manipulated by this film, but do I mind? Not really. I don’t hold it against the film because it tells its story with so much beauty and grace.