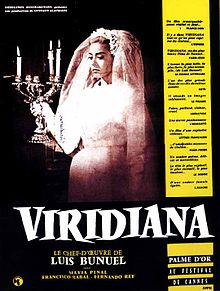 Luis Bunuel like another cinematic auteur, Ingmar Bergman, seems to often fill his films with religious imagery and themes, but whereas Bergman appears to have genuine questions about his own spirituality, Bunuel is all but content to subvert all such depictions for his own purposes. He has a wicked sense of humor with the opening crescendos of Handel’s “Messiah” playing over the credits only to come back later when his film is at its most tumultuous.

The story opens, of all places, in a convent with a pretty young novice (Silvia Pinal) preparing to take her vows. But she is ordered by her superior to visit her long-estranged uncle. She is reluctant but goes anyways to his mansion in the country as a courtesy.

There she meets the lonely old man (Fernando Rey), isolated in his great home with only a few servants surrounding him. In young, vibrant Viridiana he finds joy and dare we say, love because in her face he sees the likeness of his now long deceased wife. She embodies the objects of all his passions and desires that he forgot so long ago when he was widowed. However, Viridiana is aloof and will show no affection towards him, ready to stay only as long as she has to. But he wants her to stay, needs her to be by his side forever, obsessing about her, and using all means necessary to keep her in his midst. It’s disconcerting how far he takes things, even lying to his niece that he took advantage of her in her slumber. Now if she leaves the house, she can never be the same woman she entered as, even if what Don Jaime is false. In the end, she does pack her bags in a tizzy and her hopeless uncle takes his life.

Now the life of a nun seems impossible, her life all of a sudden becoming tainted by these events. So she resigns to do the next best thing by taking her Uncle’s home and opening up its doors to the less fortunate — the beggars and the sickly. It’s a nice sentiment, but it doesn’t turn out especially well. She also becomes connected once more with her Uncle’s illegitimate son (Francisco Rabal), who has a more cynical view of the world. He sees her piety with an air of contempt.

In the chaotic interludes that follow, the house is torn to shreds by all the benefactors of Virdiana’s charity. While she is away, they make for themselves a rich feast, “A Last Supper,” pulling out all the stops like table clothes, fine china, and wine. What ensues is utter debauchery that Bunuel plays for laughs all the while Handel reverberates over the din.When Viridiana returns and sees the degeneracy around her she slowly dissolves into a shell of who she used to be. She’s been broken and much to her cousin’s delight, she’s lost her ardor, now jaded by all that is around her.

It’s a depressing conclusion suggesting that charity is all in vain because there is a degree depravity that courses through all people. In some sense, I find a Bunuel film more uncomfortable and disconcerting than most any, because he displays the most surreal, idiosyncratic, and even perverse things as comical. He lacks reverence and reveals the darker side of humanity all with a smile on his face. His style of filmmaking is abrasive because it rubs up against social mores and has fun with the baseness of mankind. If we note that before going forward, it still seems possible to learn from him and be a tad mystified by his work.