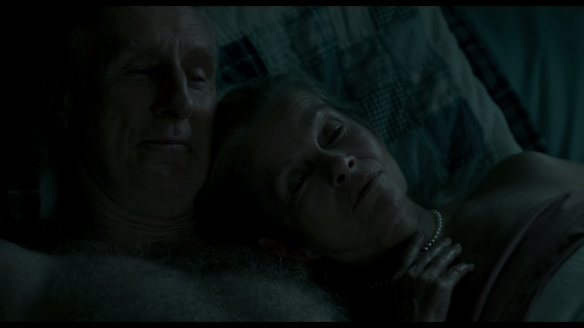 This is not a powerhouse film, but it’s bolstered by a powerhouse performance from James Cromwell. His career has always been one worth watching. He’s been prolific for many years now in films like Babe, L.A. Confidential, The Queen, The Artist, and so on. And yet he’s never been a star, simply a wonderful character actor making each film he appears in all the more interesting. He has an imposing frame, often a quiet persona, and a relatable quality.

Still Mine is certainly a romance film, but it’s about one man almost as much as it’s about a couple. Craig Morrison (Cromwell) is well into his 80s now and he is still living in a farmhouse with his wife of 60s years. Her health and memory are quickly deteriorating and he, along with all his children, knows it. He resolves to build her a newer, smaller farmhouse that will be easier to manage.

We like him as an individual because he still has ties to the old world and the way it used to be. He doesn’t beat around the bush, and he gets fed up with the impracticality of modern-day bureaucracy. He’s proud and independent. His idol was Babe Ruth, and he has a great passion for lumber because he father was a shipbuilder long ago.

That’s why when his new project hits roadblock after roadblock in the form of building code violations, he’s peeved and annoyed. But he tries to push through, going past them, because that’s his way. His main opposition is building inspector Mr. Daigle, who although he might be a sour apple and a stickler for rules, is by no means a villain.

So in a sense, this story is twofold. We get to see the ties that bind two people together even after so many years of marriage. They are so closely knit. They can have their tiffs, they can get frustrated, but ultimately there is an almost insurmountable amount of faith and affection that holds them together. It makes the mundane beautiful and yet at times, it becomes difficult to watch because Craig knows that his other half is slowly losing her edge, and yet he still loves her so deeply. He gets angry with her, but he has an extraordinary capacity to love her still.

But also this film is interesting because we get to watch the resolve of a man on another front. He wants to keep busy. Despite his advanced years, he wants to do this on his own. It’s the principle of the thing, and he sticks with his convictions no matter what children, neighbors, or members of the bureaucracy say. Although Cromwell still feels fairly young and spry, I didn’t mind him playing a man quite a bit older than himself. Also, the ending including Mumford’s “After the Storm,” was a rather surprising inclusion, but not a bad thing. It adds a contemplative tone to this film’s resolution.