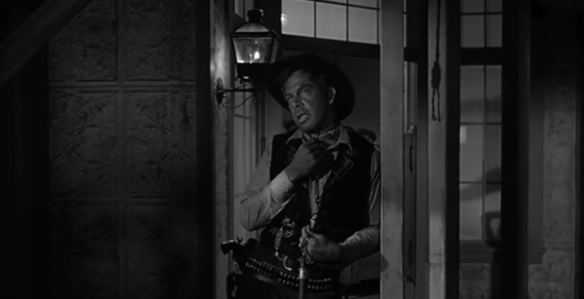 I can enter into a discussion of The Man Who Shot Liberty Valance from two different avenues. Most obvious is the film itself. As far as star power, Lee Marvin is playing third fiddle to John Wayne and James Stewart, the undisputed stars of this film.

However, Liberty Valance is a wonderful role, because certainly this is about Wayne and Stewart, but on the other hand its Marvin who has his name in the title, and that’s not something to be taken too lightly. He’s at the core of this film, because it is his villainy and criminal activities that create the conflict in this story line and elicit a response from both of our leading men. He forces their hand and it becomes the call to action for a final showdown.

The fact that the film’s narrative is told, rather like a film noir, with a flashback creates this type of aura not only around Wayne’s Tom Doniphin but the notorious Liberty Valance himself. Because although we see Ransom Stoddard (Stewart) in the present along with his faithful wife (Vera Miles), the  two other men are only made available to us through eyewitness account. Around them is built a type of legend and that ultimately makes Liberty Valance a fascinating figure. Dressed in black, swinging his whip menacingly and boisterous as all get out, Lee Marvin is the perfect man to portray Valance.

In a sense, it feels like he’s at the crossroads of his career, in transition from his heavy roles to being a top billed tough guy. The Big Heat and Liberty Valance represent his earlier turns before he progressed to The Dirty Dozen and Point Blank as a silver-haired tough-as-nails leading man. Marvin was arguably never more larger-than-life than his time as Liberty Valance. Perhaps it was because he was forced to hold his own against Stewart and Wayne. As the famous quotation goes, “When legend becomes fact, print the legend..” Well in this case, Lee Marvin did make Liberty Valance in a legendary villain deserving to be among the pantheon of baddies.

However, there’s also Gene Pitney’s billboard charting tune also called “The Man Shot Liberty Valance,” which although it was not featured in the film, sums up its story quite impeccably.

When Liberty Valance rode to town, the womenfolk would hide, they’d hide
When Liberty Valance walked around, the men would step aside
‘Cause the point of a gun was the only law that Liberty understood
When it came to shootin’ straight and fast, he was mighty good

From out of the east a stranger came, a law book in his hand, a man
The kind of a man the West would need to tame a troubled land
‘Cause the point of a gun was the only law that Liberty understood
When it came to shootin’ straight and fast, he was mighty good

The love of a girl can make a man stay on when he should go, stay on
Just tryin’ to build a peaceful life where love is free to grow
But the point of a gun was the only law that Liberty understood
When the final showdown came at last, a law book was no good

Alone and afraid, she prayed that he’d return that fateful night, aw, that night
When nothin’ she said could keep her man from goin’ out to fight
From the moment a girl gets to be full-grown, the very first thing she learns
When two men go out to face each other, only one returns

So if Marvin’s portrayal doesn’t already make Liberty Valance into a mythical villain, then this number certainly does. We can read it a bit like a western folktale, emotive and surprisingly true to the film’s narrative arc. But what it leaves us with are the result of that showdown that happened so many years ago…

The point of a gun was the only law that Liberty Valance understood, and he was forced to pay penitence for his misdeeds under the barrel of that same law — at the hands of the hero christened only by the name “The Man Who Shot Liberty Valance.”

Written as part of The Great Villain Blogathon featured HERE…