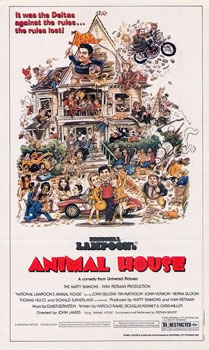 You can take Animal House one of two ways. Either it glorifies fraternity life to chaotic proportions or it’s a satirical mockery of the collegiate institutions. Either way, the film works, because the bottom line is that it has laughs. Sure, some of them take hold of nostalgia while simultaneous instigating the trend towards crude, gross-out humor, but Animal House has some generally uproarious moments of mayhem to match some quality pieces of irony. When you actually think about it a lot of these characters are great fun too.

By now John Belushi’s role has taken almost a legendary-like aura and it’s true that he seems to exist in his own world of continual cosmic anarchy that never ceases. He’s the heartbeat of the film’s comedy, but he’s not what keeps us around. Our initial introduction to frat life comes with our two protagonists who just happen to be future pledges. “Pinto” is the shy one and Kent “Flounder” Dorfman the chubby doofus no one really takes seriously. There’s no way they can hang with the elite Omega pledges (ie. Kevin Bacon), but at Delta, they make the grade. In fact, although they have a few standards, there aren’t many and the upkeep of Delta’s house says as much.

Aside from Bluto, their ranks are made up of “Otter” the confident handsome one in the group and his bud “Boon” who is trying to hold things together with his girl (Karen Allen), while still keeping up with fraternity life. Robert is the clean-cut one of the bunch and D-Day (Bruce McGill) fits his name as the motorcycle riding anarchist second only to Bluto.

Their life and escapades don’t have much substance sans sex and alcohol or redeeming value for that matter, but there could be worse guys to spend a night with, arguably. Even the nice ones get in their share of trouble. “Otter” unknowingly makes advances on the Dean’s wife (Oops), while Lawrence starts a budding romance with a smiley girl who happens to be the mayor’s daughter and a minor. Major oops.

John Landis seemed the perfect helmsman if what I’ve heard of The Kentuck Fried Movie is any indication. In truth, the film is American Graffiti with an edge, going so far as to utilize the earlier film’s character epilogues, and yet Animal House can hardly be called derivative. It too brought new interest in old modes of music like Sam Cooke, “Louie Louie,” “Shout,” “Let’s Dance,” and Percy Faith’s oddly airy “Theme from Summer’s Place.”

However, it focuses on a different slice of life altogether and as its name implies, it’s looking to lampoon the college experience as only young people can. In fact, most of the individuals connected with The National Lampoon magazine and the resulting film still were not all that far removed from college (Douglas Kenney, Chris Miller, and Harold Ramis). They still got the essence of the experience, only ratcheting up the extremes a bit.

Beyond Belushi, you have caricatures like Dean Wormer who is the hard-nosed czar of Faber College, looking for any way to put away the infamous Delta for good. He’s essentially the original Mr. Rooney, college addition. He’s in cahoots with the rival fraternity that’s equally objectionable, it’s just that they function inside of the rules. Thus, the “good guys” are easy to hate and the “bad boys” easily garner our love. Aside from the food fights, toga parties, and obligatory late-night shenanigans, Animal House wrote the rules of subsequent generations of mediocre frat comedies. Amidst all the hubbub and tumult it remains the undisputed champion of the genre.

It’s all perfectly summed up in the final parade that channels all the earlier rambunctiousness in one final act of vengeance. It predicted the formulation of the phrase YOLO. Because if you’re already expelled what else do you have to lose? But enough of that. See Animal House for yourself and make your own judgment. All I can vouch for is that my college life never looked like that, although truthfully I was never involved in a fraternity. I am envious of that dining hall though with so much food to be wasted in an utterly arbitrary food fight. It must have been nice to be part of the affluent classes circa 1962. But then again, “Fat, drunk, and stupid is no way to go through life.” Viewer discernment is advised.