“I always did like a man in a uniform. That one fits you grand. Why don’t you come up sometime and see me? I’m home every evening.”  ~ Mae West

Mae West is a larger-than-life personality if there ever was one. So large in fact that it’s hard to believe she was even a real life person. It’s easy to watch a film like She Done Him Wrong and just see her as almost a mythic figure. Because, honestly this 30s pre-code comedy is only a small trifle at most. Its story is only a partially hewn tale of a gay nineties joint and the nightclub singer that rules its sleazy halls with her diamonds, stoles, and mischievous nature. There are a wide array of men in her life all ages, shapes, and sizes: Noah Beery Sr., Owen Moore, Gilbert Roland, and of course, Cary Grant.

The film gives us this very early appearance from Cary Grant, and he’s the only person close to giving West a run for her money. When they share scenes together they don’t exactly fit together. He’s young, tall, handsome, and playfully refined. She’s full-figured and older, but still glamorous. In many ways, they represent different eras, and this was most certainly hers. 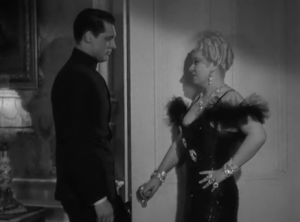 This is her film — her personal vehicle. She rules it that twinkle in her eye and a rapier wit coming from her mouth. Sometimes it’s not even what she says but how she says it (Why don’t you come up sometime and see me?). No one quite has a delivery like her. Whatever she says seems to carry implications and double meanings. In a modern culture that’s overwrought with sexual innuendo and bad taste, West led the trend when it was still in vogue. Back then, it was certainly controversial, but the box office doesn’t usually lie, and West did pretty well for herself, especially during the Depression era. There’s a reason that soldiers named their life vests after her. She was the queen of double entendres in the post-Shakespearian age, and she was ripe in the public consciousness. There was no one quite like her.