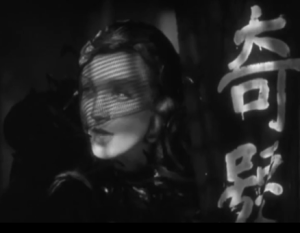 The same year as Grand Hotel there came another film, that while still boasting an ensemble cast felt far more intimate. In its day it was christened “Grand Hotel on wheels” and its narrative does unravel aboard a train. However, Josef von Sternberg’s film opens with a faceless atmosphere spilling over with the bustling commotion of a railway station. It takes a few moments to lock onto the characters we will be making the journey with, but we won’t soon forget them.

The always reputable Eugene Palette, perpetually gambling his way to Shanghai. The invalid opium dealer is rather an annoying fellow, and the man of faith appears conventionally narrow-minded, although he does make a turn for the better. Warner Oland takes on a more menacing iteration of his Charlie Chan character, while Anna May Wong gets a well-deserved role as a fellow passenger who shares a room with the famed Shanghai Lilly, the fastest lady in the East. Yes, Marlene Dietrich is Lilly, a woman of notorious reputation, but she also carries a distant, wistful love affair in her memories. The train to Shanghai brings all that hurtling back in the form of Captain Donald Harvey (Clive Brooks).

All this is set against the backdrop of a Chinese nation fraught with unrest. When the engine isn’t impeded by a stray cow or chicken, Chinese soldiers board it to apprehend an enemy agent. But that’s just the beginning. The rebels retaliate by holding up the train as well and questioning all the passengers on their financial and political capital. It’s a tense sequence of events that has no simple resolution.

It is in these moments that are two female heroines must act. Hui Fei (Anna May Wong) so that she might defend the honor of herself and her country. Lilly so that she might express the great, expansive depths of the love she still holds for “Doc.”

Shanghai Express exhibits a simplistic view of religious faith as well love, but perhaps that’s actually one of its strengths. It suggests that faith and love go hand and hand whether it be Christianity or romantic relationships. It’s true that there’s no greater act of love than someone laying down their life or putting their life on the line for friends. There’s nothing overly melodramatic here, but everyone ends up where they are supposed to and justice is dealt. It’s an eventful, passionate, perilous train ride indeed.

Ironically enough, this is a film for the masses that completely disregards their class in favor of the first class club car. Except you could make the argument that they rather preferred the sumptuous extravagance of the upper classes to their own Depression-filled lives. Movies most certainly were the grandest of escapes from reality. Shanghai Express undoubtedly quenched their desire. At the same time, it’s simultaneously a story of exotic intrigue and human drama that blends the prodigal and the personal in high fashion.

To its credit, the film makes comment on Warner Oland’s complete lack of ability to look Asian, although he does fall into some other stereotypical potholes. Also, it acknowledges the preconceived expectations of Asian women that Anna May Wong resoundingly rebuts with her performance. She represents everything pushing back against the Yellow Face of Oland’s numerous portrayals. The effort by Asians to get more complex, multidimensional, and sympathetic. The path is still yet to be fully paved, and representation in media for any class or race is never going to be fully realized. We can never expect it to be perfect or overly politically correct. Because humanity is inherently broken and always and forever incorrect.

You can certainly say that Marlene Dietrich unequivocally overshadowed the career of her longtime lover and collaborator Joseph von Sternberg, but Shanghai Express belongs to both of them. He as her director. She as his muse. Despite, its meager running time, it’s a fine achievement and an enduring Pre-Code classic.