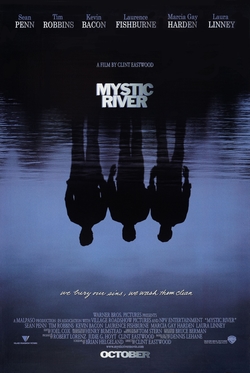 When you enter into the world of a film you often expect it to be perfect in your own minds-eye, following your own rationale to a logical conclusion. In that sense, Mystic River is invariably imperfect in how it ties up all its loose ends, but then again, what film really can bear that weight — and it’s all subjective anyhow. Instead, Clint Eastwood’s Boston-set drama builds off a story about three young boys and evolves into an engaging police procedural intertwining the lives and events of these three individuals. But it all starts with a game of street hockey.

After losing their ball down a gutter drain, the three lads sign their names in a slab of wet cement, only to be accosted by a formidable man who won’t take their small act of defiance. He yells at the most unnerved of the three to pile into the backstreet of his tinted car. The boy thinks he’s off to the police station, but these men have far more traumatic intentions for him. It’s three days before young David flees into the woods like a spooked animal disappearing into the fog.

It’s a harrowing entry point of reference, that only makes sense after flashing forward to the present. The three boys are grown up. Dave, still hounded by his past, is married and raising his young son. Although work is hard to come by, they’re eking by.After a stint in prison and the death of his first wife, Jimmy is remarried, running a local convenience store. Sean is the straight-arrow of the bunch and became a cop.

As is the case with youth and childhood friendships, the ties that bind us together are often severed with the passing of time as people grow up and drift apart. But those formative years never leave us and when these three men are subsequently thrown back together, their past resurfaces.

One evening when Jimmy is in the backroom of his shop his daughter from his first marriage, the vivacious Katie gives him a goodnight kiss, as she is about to go out with friends. That same night Dave spies her partying at the local watering hole, but before he goes home he gets into an altercation with a mugger — at least that’s what he tells his wife. Except the next morning, Sean is assigned to a local crime scene along with his colleague (Laurence Fishburne), and it looks to be a grisly ordeal.

From thence forward, the seeds of doubt begin to spring up in our minds. What did Dave really do? Who killed this girl full of life and exuberance? Jimmy wants to know those exact same answers, and he’s welling up with bitterness and discontent. Sean walks this fine line of doing his duty and treading lightly on this man he used to know well and now is practically a stranger. Meanwhile, Dave lives his apathetic little life, looking to obfuscate what happened that night with the help of his fearful wife.

But of course, when Jimmy catches wind of what Dave did, he puts two and two together and comes to his own convenient conclusions. He wants justice after all. Even when Sean and Whitey make crucial discoveries of their own, it’s too late to stop the wheels from turning. Jimmy’s mind is already made up.

To his credit, Brian Helgeland’s script adeptly keeps all its arcs afloat, crisscrossing in such a way that leads to more and more questions, because there’s ever a hint of ambiguity. Nothing is quite spelled out and that’s paying respect to the viewer. However, there are moments where Mystic River enters unbelievable or even illogical territory, near its conclusion. Still, that does not take away from its overall strengths as a magnetic character study and gripping procedural. Tim Robbins and Sean Penn especially give stellar turns, the first as a frightened and mentally distressed man, the other as a hardened ex-con with vigilante tendencies. The fact that each character is grounded by their families is a crucial piece of the storyline, tying them all together.