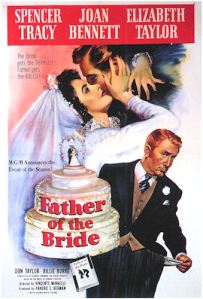 I’ve seen both versions of Father of the Bride and Steve Martin is fine and dandy but there is no better lovable curmudgeon than Spencer Tracy and he dons the role of the protective and skeptical father so effortlessly.

Furthermore, all down the line this production is an impressive gathering of talent with a radiantly young Elizabeth Taylor embodying the role of Kay, Joan Bennett leaving behind femme fatale roles for that of the level-headed mother and, of course, Vincente Minnelli positioned behind the camera. All in all, it’s a delightful light comedy that also finds time to say something heartfelt about the relationships of parents and their children, especially between fathers and daughters.

It’s rather like sitting back for story time as Tracy struggles with his shoes and begins to regale us with the recent happenings — the events that left his stately home looking like a hurricane disaster zone. It was all as a result of his daughter’s wedding. The event that is bound to challenge his sanity and bankrupt him in the process. But it’s for his “Kitten” so he’s willing to go through it out of his unwavering love for her.

First, he’s dubious of his future son-in-law, cringing at the thought as he shuffles through his memories of Kay’s many beaus. In his estimation, none of them was a winner, but then again, no one is good enough for his daughter. He’s not too excited about giving his daughter away nor by the prospect of supporting her good for nothing husband either. I’m sure most every father has the same conundrum to wrestle with. And it’s important to note that it’s played for comedic effect but never in a way that belittles these characters.

Minnelli was always a master of the color medium but here he still takes on the important role guiding us through the comedic moments with a deft touch and allowing us to track with the mayhem at large when necessary.

There are also some wonderful spots for veteran supporting players like the overly stuffy wedding coordinator Leo G. Carroll and the charmingly enthusiastic Melville Cooper as he guides the wedding rehearsal with a chaotic vigor.  Then, of course, there’s the prospective groom Buckley, played by the always affable everyman Don Taylor.

But everything must return to Tracy and Taylor because they are the nucleus of the storyline and as such, they work well together. Admittedly, Taylor might feel slightly out of place in such a family, but she is Elizabeth Taylor and she’s captivating all the same. Putting her together with Tracy means a lot of poignant sequences. Those moments where he comforts her, encourages her over a midnight snack at the dining room table, and finally, willingly gives her up to the man she has chosen to have and to hold for the rest of her life. To its credit, the film strikes a fine balance between comedy and heart always returning to this father-daughter relationship.