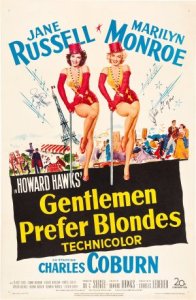 “I can be smart when it’s important, but most men don’t like it.” ~ Marilyn Monroe as Lorelei

Marilyn Monroe and Jane Russell together. It’s a crackerjack combination and Howard Hawks milks it for all its worth. There’s streetwise Dorothy  (Jane Russell) wooing all the boys from here to kingdom come. She cares about more than just money, especially when it entails having fun. Her other half is the vivacious bubble-headed beauty Lorelei like only Monroe could pull off. She’s the girl looking to get hitched with her bookish millionaire and she’s not afraid to admit that his money sweetens the pot. It certainly doesn’t hurt (Don’t you know that a rich man is like a pretty girl? You don’t marry her just because she’s pretty. But, my goodness, doesn’t it help?).

Time and time again words and bits of dialogue leave her lips that are almost astonishing. She delivers them with such a fluid air of seriousness that they force a double take and each and every time she has the audience in the palm of her hand. We think she’s dumb, but whether it’s the just the persona she puts on or a bit of Marilyn Monroe herself, she is extremely intelligent. If nothing else she knows how to captivate an audience, not letting them soon forget her magnetic performance.

If she had been playing against anything else Jane Russell would have been the primary attraction and she’s always wry and lovely, but with Monroe in the equation, they develop into a dynamic duo, leaving a wake of hapless boys behind them. There’s the old playboy Piggy (Charles Coburn) with a tiara Lorelei has ambitions for, the hired private investigator Ernie Malone (Elliot Reid) who finds himself falling for Dorothy, the diminutive Mr. Spofford and, of course, the hapless Gus (Tommy Noonan).

It can be easy to write Gentlemen Prefer Blondes off as a superficial musical — a provocative color extravaganza aboard an ocean liner. After all, it’s a story complete with pools, water slides, romance and a whole squad of athletes with bulging biceps. But it is a genuinely enjoyable film with Howard Hawks once more showing his aptitude for skirting between genres, this case indulging in musical comedy.

The sparkling and most remembered number is, of course, Monroe’s sultry turn in “Diamonds are a Girl’s Best Friend,” clothed in velvety pink,  but really for the entire running time of the film, Monroe and her costar are continually strutting and snapping their way into the hearts of everyone they cross paths with. A final comedic twist of an ending, playing off the comedic dynamic of the film’s pair of heroines, gives Jane Russell an equal chance to show off her star power. This truly is a team effort, even if gentlemen circa the 1950s were discriminatory towards all non-blondes.  Obviously, this film and my commentary are not meant to be taken too seriously. Still, they can be enjoyable. At least in the case of this film. My commentary, not so much.