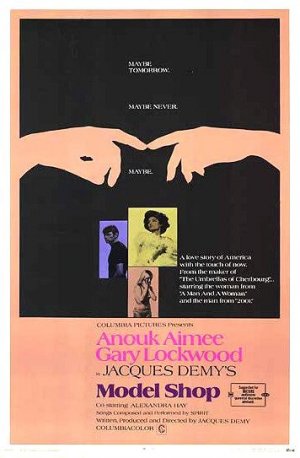 At face value, Model Shop is an ordinary film of little consequence but look a little deeper and it’s actually a fascinating portrait of the L.A. milieu in 1969. Part of that is due to the man behind it all.

Jacques Demy is among the foremost of French directors, most obviously for his work in musicals like The Umbrellas of Cherbourg and The Young Girls of Rochefort. And Model Shop, his first American production, functions in some capacity as a type musical (featuring a score from SoCal rock band Spirit), while also incorporating Anouk Aimee’s character from his earlier success Lola (1961).

It’s a musical in the way that American Graffiti is a musical except its soundtrack is a mixture of Spirit and classical music in equal measures emanating from car radios. But it also maintains Demy’s type of storytelling where he weaves characters together with acts of fate.

The film follows a typical day in the life of Gary Lockwood who is an architecture grad floundering in a general malaise as he lives in a shack with his girlfriend who is making a go of becoming an actress. He’s not ready for a long-term commitment and the fact that his car is about to be impounded pretty much sums up his life.

On a whim, he follows a beautiful woman up into the hills by car and nothing happens right away, although he is taken by the panoramic views of Los Angeles. The sequences that follow develop L.A. into a character on its own. One moment George stops for a girl who quickly rolls a joint and offers him one as KRLA hums over the radio waves, in another, he is making his way down the Sunset Strip. There’s a substantial cameo from Spirit keyboardist Jay Ferguson, who genially gives George a helping hand while trading a bit of small talk. It’s might seem a rather odd inclusion and yet from Demy’s point of view, this group evokes something of the L.A. ethos. It’s understandable.

The biggest reveal comes midway through the film when George learns he’s been drafted to go fight in Vietnam. It’s a bitter twist of fate that shakes up his existence in only a matter of minutes. His freedom has instantly been constrained to a matter of days. That’s all the time he has to get to know this mysterious woman who he professes love to. These are the last moments he will see his girlfriend as their relationship subsequently goes down the tube.

So in some ways, Model Shop shares a bit of Demy’s earlier sensibilities but it by no means feels like he’s trying to transport his style flatly to an American audience. If I didn’t know any better, initially, I would say that this was a purely American production because it feels relevant and realistic to the degree that it can be. Except as he always does Demy is making a sort of fantasy, even if we don’t realize it at first. There’s the reverence of an outsider, someone who sees this City of Angels for its beauty and utopian qualities, while others have begun taking it for granted, seeing only the smog and the violence. That’s what Demy lends to this story, a hint of admiration. And in the moments the dialogue gets more introspective it hardly feels stale but really evokes a candidness.

It strikes me that George is mesmerized by the French woman, although his own girlfriend is very pretty. In my own mind, for me, it becomes a sort of an allegory for European versus Hollywood cinema. One perhaps is more glamorous, namely Hollywood, but other countries oftentimes have far more intriguing films. However, it’s important to note that Demy seems to have an appreciation for both. He more than some had a deep admiration for the musicals of Hollywood’s Golden Age especially.

Another fascinating caveat about this unassuming film is the fact that it could have featured a performance from a young unknown named Harrison Ford. Wouldn’t that have been interesting? But in the studio’s infinite wisdom they assumed Lockwood would be a bigger box office draw. It’s probably because he was in a little film called 2001 A Space Odyssey the year prior. For what it’s worth, Demy’s film didn’t do so well and it still resides in relative obscurity. However, it gives an image of Los Angeles that is rather like a time capsule, starkly different than Demy’s other work and still beautifully tied together with his previous films through a photo album showcasing faces that are very familiar. It’s a striking callback and in some strange way, it connects the director’s work together in a surprisingly satisfying way. Jacques Demy is still worth a watch.