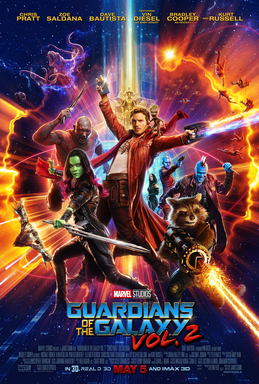 I find that my own life was greatly influenced by my father during my most formative years, in particular in the realm of music. I grew up on the classics of the ‘60s. But there’s that juncture in time perhaps during middle school where you begin to branch out and you latch onto other sounds for some inexplicable reason. And it doesn’t have to be modern artists but even those who your parents never imparted to you. That is to say that “Brandy” by Looking Glass is such a song for me. I loved it the first time I heard it and not on any provocation of my parents. I consider it one of my own personal favorites.

Thus, when Guardians of the Galaxy opens in Michigan in 1980 “Brandy” blaring on the radio of a sleek convertible I resonate with the moment. The man and the woman are unknown to us but that familiar Dairy Queen Middle America matched with that paradoxically joyfully melancholy love song pulled me into Guardians of the Galaxy Vol. 2 in an instant.

In this way, the film still plays to its strengths namely a retro vibe that’s in perfect cadence with the tongue in cheek tone and explosive sci-fi storyline. Writer-Director James Gunn is back in the driver’s seat delivering his expected riff off the Marvel blockbuster that at this point is both irreverent and violent with persistent zingers and mild touches of heart. It’s the kind of entertainment that will easily find a broad audience because once more he delivers the goods while simultaneously making light of them. We generally like him for not taking his subject matter too seriously, even if sometimes it, ironically, feels like the story dips too quickly into melodrama.

Still, at its core is a misfit hero that we love to cheer for in Peter Quill (Chris Pratt). This film examines in greater depth his own identity as a part human part spaceman. He’s still reeling in the shadow of his mother’s death many years ago and then he meets the man purported to be his father (Kurt Russell) the charismatic Ego.

Meanwhile, there are his other relationships to be parsed through and in many ways, they get pushed to the fringes. Baby Groot (Voiced by Vin Diesel) definitely ups the cute factor and Rocket (Voiced by Bradley Cooper), as well as Yondu (Michael Rooker), are there to play their crusty curmudgeon roles that nevertheless are given a bit of definition. We like them better by the film’s end as might be expected just as we are made to consider the dynamic between Gamora and her vengeful sister Nebula.

So Guardians is not only grounded by Walkman and classic tunes and a very human sense of humor but these relational moments. True, they’re not played out to the best degree as Quill tries to figure out his “Sam and Diane” thing with Gamora (Zoe Saldana) or reconcile his feelings for his father but that’s okay.

My only qualms are the fact that sometimes Gunn seems to play too much into the jokes and tries to delve into the conflict too quickly so it comes off a little shoddy. The laughs are funny initially and the drama compels us at first but at times Guardians seems to stretch itself too far tonally. It was not meant to do that much.

But the characters are still an endearing ragtag band of misfits, the music is spot on (ie. Sam Cooke, Glenn Campbell, Electric Light Orchestra, Fleetwood Mac, etc.), and there are some purposeful references to Cheers, Mary Poppins, and Knight Rider that come off wonderfully as nods to a bygone era and an earth that we know and love. Brandy’s place at the center of the film’s narrative helps in in the nostalgia department as well. Whereas, in a film like The Martian you get the sense that disco was considered a cool addition, in Guardians music is often so closely tied to the storyline and the tones created in each scene visually. It uses its soundtrack incredibly well.

An interesting caveat is the fact that in the rather unexpected arena of a superhero film, spiritual issues are briefly touched on. Namely ideas of a god complex, this idea of paneverythingism as coined by Francis Schaeffer, and even the idea of duality of persons compared to a trinity. It’s all perfectly introduced to us as we enter Ego’s creation with the sounds of George Harrison’s “My Sweet Lord” wafting over the landscape.

Even if it only scratches the surface we are in some small ways asked to consider the true purpose of man, a being that while fallen is certainly meant to live in fellowship with others. What that’s supposed to look like is another issue altogether. If that’s a little too heady then there’s enough anarchy and joyous eye candy to fall back on. Enough said.