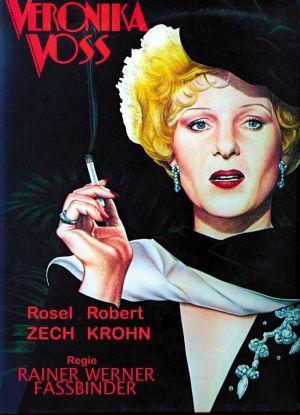 You get a sense that if they had ever met, Norma Desmond and Veronika Voss might have been good friends. Either that or they would have hated each other’s guts. And the reason for that is quite clear. They share so many similarities. Both are fading stars, prima donnas, who used to be big shots and now not so much and that seems to scare them so much so that they try and cover their insecurities with delusions of grandeur. Having to look at your near reflection would be utterly unnerving.

In the case of Rainer Werner Fassbinder’s penultimate film, the tale of Veronika Voss actually finds inspiration in a real-life figure. It’s often true that you cannot make something like this up. You can play with the truth and stretch it a bit but still, there’s at least a kernel of reality here. The source of the story is the UFA actress Sybille Schmitz a star who came under fire for her continued work in the German film industry during the Nazi regime along with a disclosed love affair with Joseph Goebbels. That in itself made her a somewhat controversial legend. That and her tragic demise…

But rather like his forefather Billy Wilder, it seems like Fassbinder too was interested in teasing out a bit of the comedy and bitter tragedy of such a bygone star. Someone who used to be big and must begin to acknowledge the fact that they are no longer what they once were. Except very rarely are they willing to acknowledge their shortcomings. There lies the tension in Sunset Boulevard and Veronika Voss.

Voss, as played by Rosel Zech, is perpetually out of breath, preoccupied with lighting and shadow, the perfect environments to showcase her looks. Nervously trying to hold onto the last shreds of her waning fame. Now she’s scrimping to get just one role a far cry from her commanding star power when she worked with her one-time husband and screenwriter.

She’s rather incredulous when she meets Robert Krohn (Hilmar Thate) a bland sports journalist who doesn’t have the slightest idea who the great Veronika Voss is. Imagine that. It’s hard to know if that’s actually something to be surprised about or if it simply dictates the sign of the times. In 1955 Voss is an apparent nobody, a has-been. She simply has not accepted the reality.

Robert has a girlfriend and they seem generally happy but still, he begins a bit of an amorous romance with Voss. However, he also gazes into the deep recesses of her personal life which are currently dictated by the controlling and manipulative Dr. Katz. The lady doctor constantly keeps the dwindling star medicated and helpless, sucking dry all her assets in the process.

The film ends calamitously but its pale tones almost make us forget the drama. Instead, all conflict gives way to a distinct wistfulness. Popping pills and alcohol are a lethal combination (Fassbinder’s own death is a testament to that), but there’s something so debilitating about human greed and treachery. It’s positively lecherous, sucking the lifeblood out of all adjoining entities.

Going back to the Norma Desmond and Veronika Voss parallels, there’s no doubt that both are thoroughly tragic figures. It shows how fickle humanity can be. We’re so quick to love someone when they provide some sort of agency or pleasure but lose that allure and you’re kicked to the curb. That’s the way things often work — the sad inner workings of the world.

Fassbinder always has a knack for framing his sequences given his background in the theater and numerous scenes are shot through windows, windshields, and the like. Also noticeable are the quick transitions and wipes cutting from scene to scene like films of old. Voss also utilizes a fascinating layered sound developing an auditory collage of dialogue, score, and diegetic music. Featured tunes like Johnny Horton’s Battle of New Orleans and Tennessee Ernie’s Ford’s brooding Sixteen Tons serve a double purpose. They lend a specific time stamp to the alert viewer, while the country sounds simultaneously feel strikingly at odds with this world that we are introduced to.

But one last time the parallels become obvious, this time between the director and his subject. There’s a sense that he knew all too well what it was like to be someone like Veronika Voss. Famous beyond your years and in the same breath so utterly tragic. And both their lives, the adapted truth and the reality, arrived at much the same devastating ending. As surely as sparks fly, Man seems born to trouble.