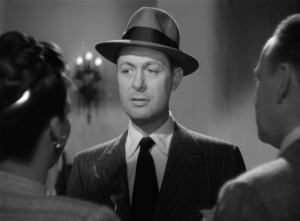 Films Noir often find their hooks in lurid titles but also in metaphor. Ride the Pink Horse fits into the latter category as pulled from the pages of Dorothy B Hughes and adapted by Ben Hecht & Charles Lederer. The horse can be taken in the literal sense as one of the wooden animals that go round and round on the local carousel but there’s some symbolism in this opulent creature. In some distant way, it’s the fantasy of a different life that every man seems to crave when he doesn’t have it. But still, he strives and grinds to get closer and closer to it. More often than not he does not succeed in finding so-called contentment.

Whether you get that sense from actually watching Ride the Pink Horse is up for debate, but it’s a film that deserves more limelight for its numerous assets. Robert Montgomery is not necessarily the most agreeable lead at first as Lucky Gagin, a war vet who travels to the New Mexico tourist trap of San Pablo to end some unfinished business for a friend.

But the camera gives the sense of constantly tailing Montgomery as he makes his way through the surprisingly atmospheric streets of New Mexico. The on-location shooting is a credit to the film, in particular, the work inside La Fonda Hotel in Santa Fe that gives a certain Spanish sensibility to the film through its very architecture. It has the type of color that you expect to find in a place like Rick’s Cafe or The Mos Eisley Cantina. 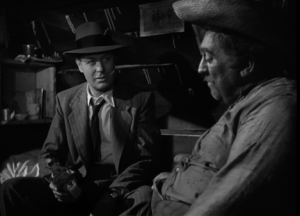 And it’s from these opening moments that we try to get a line on Gagin by watching his every move and word. He’s brusque and abrasive with almost crazed features — constantly suspicious, demanding, and sour. He had a little too much cyanide for breakfast (although he does like fruit cocktail). Just as we watch him with interest, his probing eyes case every joint and every person he comes in contact with. Because, if it’s not obvious already, he’s not come to San Pablo for R & R. He’s come to town to avenge his dead army buddy, who was double-crossed and put out of a commission by a very big man (Fred Clark).

Gagin’s looking to get Shorty’s due: $15,000. But he hasn’t thought it out a whole lot; he doesn’t quite understand what he’s up against as is often the case with rough and tumble noir heroes. It can be their undoing. Uncle Sam (Art Smith) is in one sense grandfatherly but there’s also a sly sparkle in his eyes that leads to some question to his motives. Does he really have Gagin’s well-being in mind or is there something sinister going on here? It’s too early to tell.

However, in a dive bar, Gagin meets the jovial local Pancho (Thomas Gomez in a particularly spirited performance) who quickly befriends the out of towner over drinks and simultaneously makes the audience like Gagin a little more by simple transference. We like Pancho right off and if Pancho likes this character then we might as well give him a chance. He makes him into an actual human being and that’s what he’s searching for too. Because, in truth, Gagin is wary of anyone and everyone. The people who are out to get him. The “dames” you touch only to get stung in return. 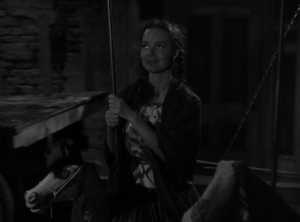 Just as there is a cultured femme fatale (Andrea King), her counterpoint is the tentative Pila (played sympathetically but rather unfortunately by Wanda Hendrix), who floats in to watch over Gagin even when he doesn’t want her around. She stays anyways.

A merry go round was utilized by Hitchcock a few years later in Strangers on a Train but in a different way. He used the frenetic energy to his advantage. In Ride the Pink Horse it’s the blatant juxtaposition that is telling. Something so pleasant and joyous as a merry go around takes a whole new meaning in the presence of violence.

A grand fiesta makes its way through town that culminates in the traditional burning of the effigy of Sasobra, The God of Bad Luck.  A dozen years later Sam Fuller would use a similarly lively cultural celebration as the climatic backdrop for The Crimson Kimono.

However, what stands out about Ride the Pink Horse is the idiosyncratic roads it traverses. It’s difficult to put a finger on it exactly, as it has glimpses of other films but there’s also nothing quite like it. The way the story progresses, what the characters find time to talk about, even the title, it’s all fascinating for its very uniqueness.