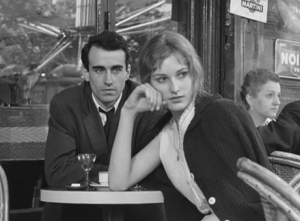 Pickpocket is an intricately staged, truly intimate character study from the inimitable Robert Bresson solidifying itself as one of his greatest works. As was his practice, Bresson took Martin LaSalle, a non-actor to be his leading protagonist.

The Uruguayan-French actor sports gaunt, rather severe features, thick eyebrows, a sauntering gait and a slumped posture. However, there’s also some facial similarity to Henry Fonda there, except LaSalle is even more “normal” if you want to go that far. He seems altogether unextraordinary and still Bresson manages to tell an engaging story with such an unassuming star–not through emotions but the inverse–a complete lack of emotions replaced instead by actions.

Aside from being a vagrant who lives in a dilapidated flat, Michel is a cynic who holds a bit of a superman complex. In fact, he’s not far off from Raskolnikov in Crime & Punishment. The difference being his crimes are more mundane. The outcome is less pronounced. But he too achieves a kind of redemption.

With such a life as he leads, not working, with hardly any friends, or anything to do aside from betting on the horses, Michel fills his idle hours learning what it is to be a pickpocket. It becomes his livelihood as he joins forces with some accomplices, honing his trade, and gleaning inspiration from the life of pickpocket socialite extraordinaire George Barrington. Except Michel seems nothing like this man. He’s no adventurer or colorful personality. He watches the world with passionless eyes, lacking purpose, and hardly talking to anyone. When he does, it’s generally brusque. He’s not looking to make friends–aside from his “buddy” Jacques. He hardly even visits his sickly mother even when she’s lying on her deathbed.

But that’s what makes his nearby neighbor Jeanne (Marika Green) all the more fascinating because she brings something out of him. It just takes him a long time to realize it. I cannot get it out of my head that Marika Green shares some striking resemblance to Natalie Portman. This notion shot into my head the first time I ever viewed Pickpocket. It serves no real obvious purpose but to suggest her stunning beauty and maybe even that there’s a modernness to her or better yet a timelessness behind her eyes that’s full of some sort of inexplicable power. Maybe Natalie Portman has that same quality as well. It’s difficult to say.

It’s striking that many of the scenes in Pickpocket are almost silent, lacking scoring and often even dialogue, and yet they’re choreographed like the most elaborate dance. Instead of feet, though, hands are involved. The dexterous hands and limber fingers of pickpockets.  And his eyes rove as much as his prying fingers.

There are similarities here with Sam Fuller’s Pickup on Southstreet except in this case the life of a pickpocket, this life of second class crime is the extent of his existence. There are no gangsters, plots, or big implications pointing to Cold Wars and Communists. But if they share anything it’s their equally impressive understanding of economical filmmaking with the innate ability to tell rich, impactful stories in a highly condensed amount of time.

Michel’s life is pitifully mundane in a sense and yet within that context, he’s still able to find hope and that’s the beauty of what Bresson suggests here through the simple functions of sound and image. He evokes a great deal.

It was not the final words of Pickpocket that struck me but rather the image that we are left with. There stands Michel incarcerated in prison. It seemed inevitable. Because supermen do not exist, at least not in the way that he supposed. And yet in the same breath, when he shed that philosophy he found something better.

He caresses Jeanne through the bars, kisses her face. Yes, he’s still trapped, stuck in such a horrible spot without his freedom. But the utter irony of it all in this one moment, before a very abrupt conclusion, Michel is finally free–finally saved by the graces of love and it took a prison cell to teach him as much.  His life was propelled by inaction highlighted by contained moments of theft and deception. Therefore, it’s in this final instance that Michel finally shows some amount of goodness and affection bursting forth. His life no longer seems to be defined by being a pickpocket. For once, it’s defined by something else–by someone else.

Whereas Raskolnikov realized that he needed Sonya to resurrect him much like Christ resurrected Lazarus, Michel comes to a similar conclusion here though he only believed in God for three minutes. Still, in a sense, he has been redeemed and now there’s a certain amount of hope in his life going forward. The straight and narrow is a tough road to traverse but Michel might find it yet.