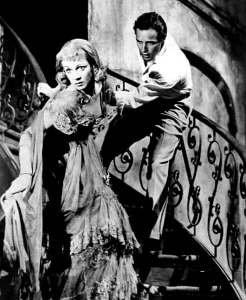 Blanche Dubois and Stanley Kowalski. They’re both so iconic not simply in the lore of cinema history but literature and American culture in general. It’s difficult to know exactly what to do with them. Stanley Kowalski the archetypical chauvinistic beast. Driven by anger, prone to abuse, and a mega slob in a bulging t-shirt who also happens to be a hardline adherent to the Napoleonic Codes. But then there’s Blanche, the fragile, flittering, self-conscious southern belle driven to the brink of insanity by her own efforts to maintain her epicurean facade. They’re larger than life figures.

In truth, A Streetcar Named Desire is one of those cases where play and film are so closely intertwined it’s hard to pull them apart. And there’s so many connecting points. Tennessee Williams helped to adapt his initial work and Marlon Brando, Kim Hunter, and Karl Malden all transposed their original stage roles to the screen while Elia Kazan took on direction once more.

As such it became the showcase of The Method, the shining beacon championing that long heralded yet controversial movement born of Stanislav Konstitine and disseminated in the U.S. by such instructors as Lee Strasberg and Stella Adler. It was from this latter teacher from whom Marlon Brando honed his craft and it’s true that he was one for the ages. The Greatest by some people’s account.

But before this film, Vivien Leigh was the biggest name on the marquee and she, of course, had ties to Laurence Olivier, the apex of Shakespearian actors and arguably the most reputed actor of the age until Brando came along. In Streetcar, you can invariably see the thin link connecting such luxuriant Hollywood offerings as Gone with the Wind to the evolution of cinema with later classics like The Godfather because it’s physically there on the screen.

Vivien Leigh, forever synonymous with Scarlet O’Hara and Brando’s own brand of sometimes brutal authenticity. She wavers and sashays through her scenes, clinging to the set and delivering her lines as pure searing drama. Whereas Brando just is. This animalistic force of brawn stuffing his face with chicken and moving through his home like he actually lives there. It’s social realism but it’s also a conflict on multiple levels that goes far beyond the main tension within the film itself.

Within the narrative, it is certainly a clash of culture, dialect, and acting styles and we’re never allowed to forget it anytime Stanley (Brando) or Blanche (Leigh) are in a room together. Still, they are not the only players in this film and Kim Hunter lends an added layer to the conflict as she simultaneously yearns for the romantic passion coursing through Stanely while wanting to protect her sister from harm. It’s a precarious tightrope to walk and Hunter makes it heartwrenching. Beyond her, Karl Malden plays Mitch, one of Stanley’s old war buddies who nevertheless exhibits a softer side that is easily taken with Blanche’s cursory level of class.

So in the end, Blanche’s fall not only harms Stella but Mitch too as he sees his heart get hurt and he feels lied too. But the one who fairs the worst is, of course, Blanche herself as she becomes completely overtaken by her delusions of grandeur. The fact that she goes for magic over reality ultimately becomes her undoing.

Today Streetcar does come off as stagy and yet Kazan is still able to personify the sticky, grungy, sweaty atmosphere of New Orleans — palpable with its billowing cigarette smoke and humidity. It somehow functions as this odd dichotomy between the theatrical and utter realism. In one way at odds and in another married perfectly because the juxtaposition only draws out the drama even further.  And the fact that the film pushed the boundaries as far as content easily heightens the drama. Stanley’s attack on Blanche is not only in a verbal or emotional sense but physical as well and we have little problem believing Brando in his role.

It also struck me that in her final moments Blanche feels hauntingly reminiscent of Norma Desmond in Sunset Blvd only a year prior. But her delusions are far more pitiful because she never was anything and yet she still tries to cling to this sense of pride in her upbringing and the looks that once were. She constantly needs the affirmation and adulation of others to reassure her in her fears and frailties. Always putting on a pretense — a face to get by — but she’s the only one she’s able to deceive in the end. It’s one of the preeminent tragedies of the 20th century and its actors guide it into transcendent territory.