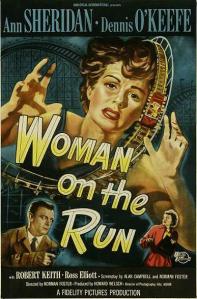 B-films have little time to waste and this one jumps right into the action. In a matter of moments, a man is shot, another man has killed him and a third witness gets away into the night. Although Frank Johnson (Ross Elliot) is rounded up by the police to be a witness he gives them the slip for an undisclosed reason and they must spend every waking hour trying to track him down.

What’s important to this particular story is that he left behind his wife Eleanor (Ann Sheridan) to be questioned by the police and they are hurting for a break. They need answers so they slam her with all sorts of inquiries.

She’s not all that cooperative though and the reasons are rather hard to discern. Is it belligerence, fear, or sheer apathy to the entire ordeal? Because you see, Ms. Johnson for some time had been drifting apart from her husband an accomplished painter who nevertheless put little stock in his own skill.

And that’s where the film’s two themes begin to intertwine.  The police surmise that the runaway man is fleeing a killer, but for his wife the implications are twofold. In her eyes, he’s just as likely running away from a marriage he couldn’t cope with. That is her dilemma which she masks both pointedly and inadvertently with various diversions to keep the police reeling.  After all, she’s not particularly keen on helping them or sticking around for that matter.

Whereas in earlier roles Ann Sheridan was always slightly overshadowed by other performers, most notable of those being the always electrifying James Cagney, here she gives perhaps her finest performance and she’s at the center of it all. That’s not to say she isn’t surrounded by a stellar supporting gallery.

Dennis O’Keefe, remembered as a gritty leading man in pictures such as T-Men and Raw Deal, showcases a new playful side as a journalist trying to nab a scoop on the runaway witness and at the same time making eyes at the man’s bride. But he manages to give the part some life that goes far beyond a one-dimensional characterization. There’s more to him as we soon find out.

The other important player turns out to be Inspector Ferris (Robert Keith) who as the long arm of the law is looking to find his man before his adversary does. But he’s not about to take flack from anyone and if ever there was a cop who was no-nonsense he fits the bill. His croaking voice always interrogating his subjects in a continuous effort to get his job done. Too bad he wasn’t quite counting on Ann Sheridan.

A relentless climax aboard a roller coaster at a local amusement park precedes Hitchcock’s Strangers on the Train when it comes to making carnival games such a deadly ordeal. And there are hints along the way ratcheting up the tension whether it’s a familiar cigarette lighter, a striking coincidence, or a passing remark that initially goes unnoticed.

The script strikes a strange path at times given to clunky expositional dialogue that feels as trite as can be and then in the very next sequence there’s a bit of patter or a dry quip that makes things all the more interesting. Also, a pair of small supporting roles for Victor Sen Yung and Reiko Sato add another layer of authenticity to the characterization only surpassed by the on location shooting that catches the essence of mid-century San Francisco.

In the end, Woman on the Run turns out to be one of those wonderful treasures that has rather unfairly gotten buried in the dusty attic of film noir. But far from being an antique, it plays fairly well today with an underlying tension running through Sheridan’s performance as she not only reflects on her own dwindling marriage but stresses to discover her husband’s whereabouts in fear of his very well-being.

It’s surprisingly entertaining and you get the sense that if Norman Forster (a fairly prolific actor, director, and screenwriter) were someone other than Norman Forster, this picture might have been scrutinized more closely. As it is, it’s just waiting for more people to dredge it up. How did I get here? If you’re a sucker for film noir and Ann Sheridan there’s no better place to go than Woman on the Run.