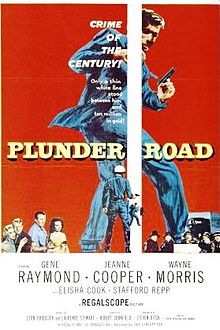 The rain is pouring down. A group of men sits in silence in truck cabs their heads full of all sorts of thoughts. Two more sit in the rear hoping the explosives sitting in their stead don’t decide to go Kablooie over the next bump. Nary a word is spoken, the entire sequence playing out in silence except for the inner monologues of each man.

But surprisingly enough all goes as clockwork with this heist as they gear up for a train carrying a U.S. Mint gold shipment. They divert the track. Get their men in place and board the vehicle to subdue all aboard. That’s done quick and efficiently and they continue doing their work that same way. They use one of the truck’s crane to hoist their plunder into the waiting beds of their getaway vehicles. No one sees it go down and no one will know anything about their job until they’re well on their way.

Of course, that’s only the first leg as the five accomplices break off. Now the spoil is split between the three trucks one loaded with furniture, another with “chemicals” and so on. So even though the events have all been done before, the execution of Plunder Road makes its version interesting in its own right.

The one lone driver steadies himself by chewing gum like there’s no tomorrow but that doesn’t help him to get past a police checkpoint after some radio static gives him away. He’s one casualty.

The only name of repute in the film that I knew was Elisha Cook Jr. now quite along in years and he’s playing a con man with the gift of nervous gab in the second vehicle. He tries to get buddy-buddy with his mate and we actually do learn some small trifles about them. It’s not much but it’s the kind of stuff that begins to make them into human beings.  They both have sons. One had his wife die while he was in the clink. The other never married. Their journey takes them to a rural gas station out of necessity and there we have the second casualty a neighborly old gas station clerk.

By this time the story has progressed to the third vehicle and they’re really sweating it now no thanks to special correspondent John Oliver from Salt Lake City who practically lives on the radio airwaves to provide the latest up to date news flashes. They weather routine police questioning and bide their time at the usual rest stops on their way to their final destination — a foundry near LA.

It’s an odd place to go but they do their best to conceal their prize in order to make their final getaway way far away from any nosy policemen. Though there plan doesn’t work completely. Still they manage. They pick up a girl who has their passports waiting for them and it looks like smooth sailing. But film-noir was born in an era that was hard-pressed to allow crime to pay and it’s a single moment of cruel fate that leads the heist off the tracks for good. Like Detour or The Killing and other such classics when fate rears its ugly head, things are never allowed to work out. That’s the accepted convention.

Plunder Road is so close to letting at least a few of its perpetrators get away but then it snatches their gold away from them. Compact heist films don’t come much better than this and this one benefits from a heightened sense of unsentimental realism.