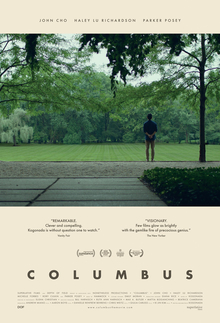 I wrote an article quite a few years back where I considered what it would be like if and when an Asian made the leap toward a true leading role in Hollywood. The performers I put up for consideration were John Cho and Ken Jeong. Back then I thought they deserved a platform to go beyond the Star Trek and The Hangover franchises.

While Columbus was not exactly the picture I was considering at the time, it’s more than I could have hoped for. I finally got my wish in this moving character study looking for pulchritude in the midst of life’s incessant turbulence. It’s an unassuming even meandering story. A version of it could exist in real life and that’s a glimmer of the allure.

The narrative plants us in Columbus, Indiana (not Ohio), a Mecca of modernist architecture, and not much else. A Korean-American translator named Jin (Cho) comes back home from Korea to call on his estranged father who is currently bedridden in a coma. It’s difficult to discern what is more tragic: That he is dying or that his son could care less.

Then there’s Casey (Haley Lu Richardson) a young college-aged woman who has foregone the typical trajectory of a person her age with her intelligence to stay behind with her mom, a recovering addict with a serial poor choice in men. While her mother tries to keep a menial job, Casey all but cares for her, spending her days working at the local library and the nights preparing their meals.

The proposed dynamic is obvious but nevertheless satiating when it comes to fruition. Where two people who seem so diametrically opposed in their life stage and social circles somehow form an immense bond in a world so often hampered by superficial, surface-level interaction.

In this facet alone, John Cho, a man waiting so long for such a time as this, has confirmed what many of us have long known. He deserves to anchor a film and Columbus proves he is more than up to the task. While relative newcomer Richardson (Edge of Seventeen) provides him a fascinating talking partner and friend who deals in terms that are simultaneously candid and profound.

Especially in the film’s opening moments, there is a brazenness to Kogonada’s staging and often stationary camera, because it creates this so perfectly symmetrical, oftentimes cavernous space. It’s the height of art and overtly so. In such moments where a color pops in a composition so obviously or he dares to linger on an immaculately staged frame, I see the touches of Ozu. Whether this was done consciously or not is hardly up for contention. It’s too close to be mere coincidence.

The framing of shots. How doorways are used as an entry point for seeing an entire sequence. The fearlessness in using what other people would deem establishing shots to tell a story through the building of an environment in front of us.

It strikes me that often shot length corresponds with the confidence a filmmaker seems to put in their work. Because if you constantly splice and dice every second or two there’s no precision necessary. It will go all but unnoticed on the cutting room floor but to be brave enough to put a sequence up to scrutiny for seconds on end — sometimes even achingly so — it’s something that has become a forgotten practice.

Where it’s alright to linger and watch faces and to catch the nuances of reactions rather than a constant barrage of over-articulated actions and histrionics. Sure, we have a few of those moments here that feel like they are the rhythms of a film drama trying too hard to be a version of reality. The character Jin even remarking in one needlessly self-reflexive moment, “This isn’t a movie.”

Whereas Lost in Translation was built around a city full of energy and cultural clout in Tokyo, with its bright lights and cutting-edge society, where there’s so much to do and a lot of stimuli, Columbus is the antithesis of this.

In fact, an issue might be that it tries to derive so many of its conclusions not through actions but the mining of personal struggles and familial strife. Those are vital areas and yet in the same sense, it’s when the film tries to unwind this exposition we feel like we are, indeed, watching a movie. Still, when it intentionally digs into conversation and moments and feelings, it’s done with tact and an undisputed transparency that’s refreshing even in its heightened realism.

Each character has their alternative foils casting a light into their lives. Certainly, they have each other and they have their parents, who have no doubt made them who they are, while also influencing the direction of their lives. But when we look at Jin there’s Eleanor (Parker Posey), his father’s assistant, and though she’s married now, Jin’s long harbored feelings for her since they first met.

Meanwhile, Casey’s coworker (Rory Culkin) is her continuous companion in the vast hall of the library they work at. He is a doctoral student serving as both a friend and someone to assist her in considering her future endeavors. But there’s no doubting he likes her even as she casually dodges his well-meaning advances.

But Columbus is also bathed in a Midwest malaise. Those terms I put together rather tentatively. In fact maybe like Lost in Translation before it, this is less about the location and more about the people who find their paths crossing. I think this might be it.

Richardson appeals to us because there’s something so chill about her. She ambles through life like one of those people who doesn’t take things too seriously, at least on the surface, because you can easily imagine if she didn’t manage to go with the flow her hardships might tear her apart limb by limb. In fact, they almost do.

But I think I only recall one character who ever had the same sense of wonderment and affection for something like the architecture in Columbus. It came in another artistically-minded and entrancing movie, Museum Hours, where the bright-eyed security guard watches over the art in his stead with the same degree of relish. He loves being surrounded by such sights.

Yes, she says most people could care less about these relics, and yet that’s not everyone. She rattles off facts like a seasoned tour guide but that’s not what does it for her. It’s the memories elicited from certain places. It’s the feelings. The undeniable monuments of magnificence found in her humble corner of the world.

There’s a mood wafting over the film’s canvas that can either be interpreted as melancholy or serenity. Because beautiful things often manage to raise our spirits while also burrowing into our distinct places of hurt. That’s how we manage to cope and ultimately come to terms with them.

So Columbus is a picture coming like a whisper, looking austere and aloof, but rip away the walls, the exteriors of some phenomenal architectural marvels, and you will come to find a beating heart that is well worth its weight. No doubt this picture will be glossed over by many. But that makes its discovery all the sweeter.