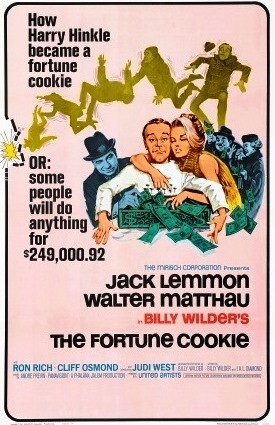 For some inexplicable reason, I expected The Fortune Cookie to be in color. Maybe in some subliminal way, I assumed it would be like a dry run for the zany Odd Couple (1968), pairing the two stars who would make the most delightful comedic coupling in years. But once you get into the nitty-gritty and The Fortune Cookie is less of an intangible idea floating up in the sky, it’s very obvious that this is more akin to The Apartment (1960) and the obvious reason is Billy Wilder.

Once more he lets Jack Lemmon do his sympathetic role, that guy that we all know who is a bit of a loser but not a bad sort of fellow. From such a characterization Lemmon’s scintillating skill at both physical comedy and verbal jokes come off like they always seem to. You can’t help but smile. But Wilder places that same man — that sorry individual — a simple cameraman named Harry Hinkle, into a very cynical world indeed. It’s Wilder’s version of America.

While he unequivocally loves the country that welcomed him when he was an immigrant, that by no means suggests that Wilder is unwilling to satirize its very flaws. In fact, he relishes doing just that. Sometimes it feels like that was what Billy Wilder was put on this earth to do. Make people laugh and do it with a biting style that forces us to look a little closer at the incongruities around us.

You can easily make the case that the main attraction here are two noteworthy dynamic duos (although it’s slightly dependent on how you want to draw them up). First Billy Wilder paired with his writing partner I.A.L. Diamond yet again after their string of successes with Some Like it Hot (1959), The Apartment (1960), and One, Two, Three (1961) among others.

But perhaps just as importantly we have the genesis of the longstanding comedic collaboration between Lemmon and Walter Matthau. It just works. It’s easy to see why they continued starring together because when they’re in the same room wonderfully hilarious things come into being.

Otherwise, the film takes a wacky premise involving a Cleveland Brown’s punt returner leveling a CBS cameraman and draws them out as far as they can possibly go. It’s actually rather impressive that this single spark of an idea gave way to a fairly substantial picture. Because all kidding aside, and without consideration of its title, the film is not unsurprisingly cut out of Billy Wilder’s cynical worldview as already acknowledged.

Yet again he finds his perspective of America derived from some combination of screwball comedy and a more downbeat, melancholy tone. True, he made some delightfully dark films-noir but this same malaise somehow worked fairly well in his comedies too.

Here it’s perfectly enhanced by world-class shyster Whiplash Willie (Walter Matthau) the conniving ambulance chaser who takes great interest in his brother-in-law’s purported injuries on the football field — even if they wind up being next to nothing. The insurance company doesn’t know that and that’s the key.

The periphery is complicated by a private investigator (Cliff Osmond) staked out across the way who has their room bugged and under surveillance. Harry’s mother is constantly bawling. The wife (Judi West) that he once loved and who ran off with another man is tantalizingly close to returning to him. Meanwhile, the soft-hearted football superstar who bulldozed him, Boom Boom Jackson (Ron Rich), looks for any way to make his little buddy’s life more comfortable and it’s taken a major toll on his success on the field.

It’s these very relationships that have Harry seesawing back and forth as his wily brother-in-law coaxes him to keep working the angle so they can nab their $200,000 in recompense. Watching Lemmon pirouette in his electric wheelchair, stiff-necked in a brace is priceless. Concurrently, Matthau seems to be limbering up for all his greatest roles from The Odd Couple to the Bad News Bears (1976) showing off his own impeccable adroitness with curmudgeon comedy — delivering dialogue in such a tone with such a way about him that’s at the same time devious and terribly hilarious. He even answers the phone like nobody’s business.

Lemmon owns the final scenes, however, as he must try and reconcile this lie he has been made to live — this charade he has been playing for the sake of $200,000. Perhaps even more troubling than Harry’s lie and less funny is what happens to Boom Boom. Because he’s such a kind soul even dangerously subservient in how he follows cinematic precedence. But we can make the case that this is part of what Wilder is poking at.

The one moment his protagonist shows any integrity, the one moment he stands up, literally, is in the face of a supposed bigot. Even if it says little, there’s no denying that it says something. Sometimes we don’t need comedies to win the big battles. A film called The Fortune Cookie is not going to garner a lot of respect (nor should it necessarily) but it can at least get us to stop and think. Maybe the utter absurdity in some ways isn’t all that far away from our own existence. That’s part of its charm. Crack it open if you’re so inclined.