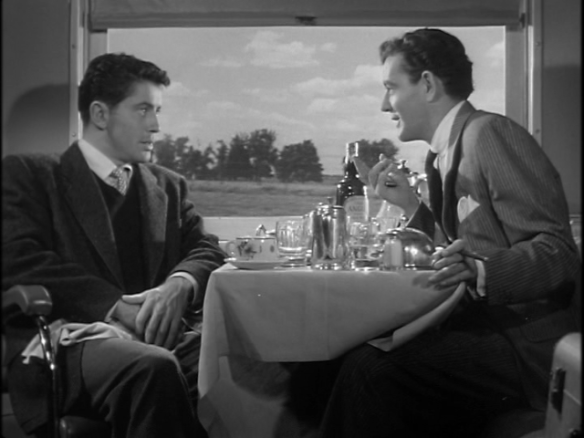 Strangers on the Train is conceived in its first few minutes of dialogue when the charismatic bon vivant Bruno (Robert Walker) ingratiates himself on tennis player Guy Haines (Farley Granger). Bruno is a big idea-man, constantly talking and thinking and wheedling his way into other people’s lives because he does have a way about him. He makes it easy for others to like him and then they let their guard down after a row of trivial jokes and he’s got them. That is until they begin to see something else entirely in him.

In this particular instance, he schmoozes Guy’s ego. He’s a big tennis star. Bruno has read up on him and knows all about him. At first, it’s mere flattery but as the conversation continues it gets more and more unnerving. Bruno seems to know a little too much almost to the point of obsession.

Still, he manages to keep the other man’s attention just long enough to share his greatest idea — imagine for a second that two men who meet quite by chance (on a train for instance) were to trade murders — leaving no motives or connections for the authorities to trace back to the culprit. Of course, the whole idea soon falls apart if not everyone is equally invested. It doesn’t work if only one individual takes such a ludicrous idea seriously.  That’s where uneasiness begins to set in.

Robert Walker’s performance might rightly be one of the greatest performances in a Hitchcock film in terms of the sheer chill factor. He’s a psychopath, somehow misguided and tortured by issues that never truly get resolved. A great talent with so much promise was lost far too young when he died tragically the same year this film was released.

But equally important is Farley Granger’s more subdued performance, that quiet sensibility that makes him an easy target for someone as magnetic as Bruno. With another actor such as William Holden (initially considered for the part), the dynamic falls apart for sheer implausibility and as a result, the film would not function so effectively. We soon believe that a relationship such as Guy’s and Bruno’s could actually exist and that shred of reality makes the tension all the more unnerving.

Due to its foreboding cinematography courtesy of longtime Hitchcock collaborator Robert Burks and Bruno hanging over Guy constantly like an expectant specter, it`s easy to trace the line of film noir sensibilities here as the darkness seeps into Guy’s picture-perfect life.

But what’s fascinating is that Bruno initially aids his newfound friend — he assists him in getting the life that he’s wanted for a long time, an existence that is respectable, complete with a beautiful woman. Anne Morton (Ruth Roman) is the daughter of a respected Senator (Leo G. Carroll) and her upbringing and general concern reflects a stark improvement in Guy’s social standing.

Is it safe to say that it’s fairly easy to harbor a crush for Roman who exudes a refined decency, even if she’s not quite Hitchcock’s icy blonde? Place her up against Guy’s opportunistic and cavorting wife and Bruno’s action could almost be considered a service. Almost… Still, Bruno spins his charisma into a deadly threat, ultimately evolving into Guy’s worst nightmare.

Meanwhile, Patricia Hitchcock sometimes feels like she is used as a plot device but nevertheless even in that aspect alone she is crucial to this story. She also doesn’t quite fit into the Morton family but her very characterization reinforces many of the themes her father is playing with often using visual language.

The most acclaimed shot for its sheer stylized perspective is the scene of Bruno’s act of murder. It’s done in only a moment, silently, and without much fanfare. The woman’s glasses fall to the ground cracked and we see the reflection of the events at hand. It’s pure Hitchcock but the entire sequence is a masterstroke in buildup.

Bruno is tracking his unsuspecting prey. He follows her into a carnival. Past the booths and the rides, by popcorn vendors, into the tunnel love and finally to a darkly lit meadow where the deed is done. But without the buildup, this continuous cutting between the man and the woman, the scene has little impact. Hitchcock gave it increased stakes bolstered by true suspense.

But what he does equally well is cross-cutting not only his two main characters but their very actions. The opening introduction showcases this contrast of personalities with Bruno and Guy. It never ceases. They’re constantly placed opposite each other intersecting and crossing each other. Yet Hitch emphasizes these conflicts visually on multiple occasions which completely justifies why his main hero was written as a tennis player.

The fact that Guy is in the thick of a match during one of the tensest segments is magnified in how the camera cuts between Guy and his opponent back and forth with the audience, line judges, and everyone else spliced in for good measure. It mirrors the very same conflict he’s still tied up in with Bruno just as the gradation of black and white reflects the good and evil that separates and at the same time connects the two men.

You can always count on Hitch to bring the goods and yet again Strangers on the Train ends with a whirling, whizzing, shrieking bit of pandemonium — a real slam-bang finish courtesy of the Master of Suspense. Over 65 years later it hasn’t lost much of its impact blending a sense of real-life spectacle with genuine thrills. And like Hitchcock’s greatest films this one works on multiple planes visually, psychologically, metaphorically, narratively, and that frees us up to enjoy it in whatever way we please. That’s the sign of a quality movie from the foremost of creators.