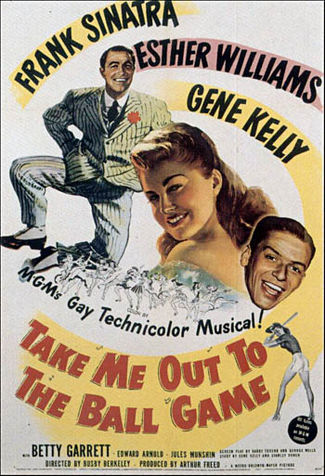 There’s something perfectly in sync between Gene Kelly and Donald O’Connor so I could never choose another duo over them but Kelly and Frank Sinatra are such wonderful entertainers that they help make this period baseball number a real musical classic even if it has to fall in line behind a row of other quality contenders.

It’s easy to half expect to see Stanley Donen’s name on the marquee as director in part because of his prestigious partnership with Kelly but instead, we get an equally renowned name in Busby Berkeley. In fact, at this time Berkeley was a veteran of musicals. However, it’s true that Donen did help with crafting the narrative on this one with Kelly and would pick up directing duties with On the Town (1949).

America’s original Pasttime (before being challenged by Basketball and Football) is ripe for a musical homage as MGM seemed to take aim at all the popular arenas of entertainment. Set during the golden years of baseball, this story, in particular, takes interest in the fictional Wolves who share some resemblance to the famed Cubs of the early 1900s with the double-play combination of Joe Tinker, Johnny Evers, and Frank Chance. In this film, the archetypal slogan, “Tinkers to Evers to Chance” is adapted into a giddy tune “O’Brien to Ryan to Goldberg” with the trio of Kelly, Sinatra, and Jules Munshin taking the leads.

Esther Williams even gets her obligatory dip in the pool while still showing her prowess as a baseball player, a desirable heartthrob, and a club owner with a certain amount of business acumen. Because she really is at the core of the story’s plot.

You see the boys, O’Brien and Ryan, are having a grand old time coming off a stint in vaudeville during the offseason and now spring training is upon them and they are reunited with their clubmates along with the scintillating prospect of another league pennant. That is until they find out that they’re under new ownership, and they suspect it’s a stuffy nobody named K.C. Higgins.

Are they surprised with what meets their eyes? K.C. Higgins turns out to be a “she” instead of a “he” and a very attractive one at that. But that doesn’t detract from the bottom line. She’s a woman who expects that she knows the game better than they do. Thus, it’s a slight musical riff on the old battle of the sexes dilemma.

Their plan of action entails setting up their buddy Denny (Sinatra) with Ms. Catherine so they can keep her occupied and off their backs. Kelly is the fast-moving playboy ballplayer who also has a complicated relationship with Katherine Catherine (that’s what K.C. stands for). While the forward Shirley Delwyn (Betty Garret) is out to snag herself a man and sets her sights on poor helpless Dennis.

There’s a bit of a black sox scandal type thread that’s grafted in at the end with Edward Arnold playing his usual corrupt businessman who is looking to ruin O’Brien’s reputation and make a killing off betting against the Wolves. Thank goodness in this case Kenesaw Mountain Landis does not come in and expulse Gene Kelly who instead is allowed to dance another day this time with all his costars.

Aside from singing the game’s most revered song on screen, (which is a relief given its name), the film also has adequate room for some of the other important aspects of baseball namely antagonizing umpires, trash talk, clowning, and brawls. After all, what would America’s game be without those finer points?

Gene Kelly even gets around to putting another feather in his dancing cap with an Irish jig proving him to be yet again a master showman and virtuoso performer on taps. He’s also probably the first baseball player in history who carried two careers as a ballplayer by day and a hoofer by night. All in all, this was the kind of Technicolor spectacle that MGM was accustomed to offering up in the 40s and 50s and it’s satisfying stuff, if not quite their best.